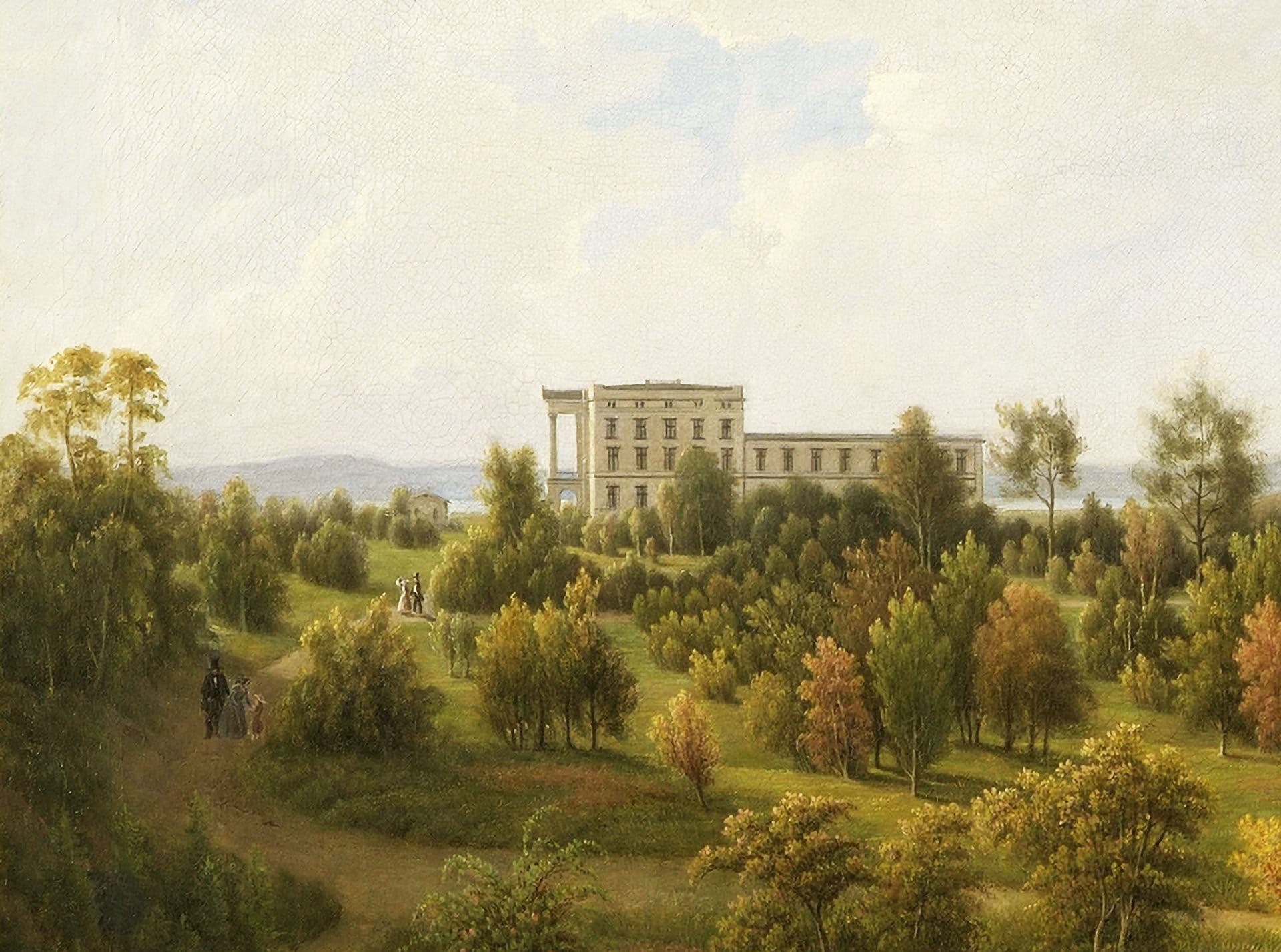 The royal palace in Oslo and its north-eastern facade. In the background, we see the Oslofjord. The painting is by the architect himself, Hans von Linstow. | Photo: Rune Aakvik - Oslo Museum cc by.

It began with a union with Sweden

Between 1814 and 1905, Norway was in a so-called personal union with Sweden, with Norway as the weaker party. The Swedish king, Karl 13, based in Stockholm, was the ruler of both countries. But it was his adopted heir, the French-born general Jean Baptiste Bernadotte – the later Karl 14 Johan – who was to set his mark on Norway’s capital Oslo, and build himself a palace there.

Accommodation fit for a king

Before 1814, Norway was part of the Kingdom of Denmark for several hundred years. When visiting Oslo from Copenhagen, the Danish kings lived at Akershus Castle or in other relatively modest accommodations. The French General Bernadotte, on the other hand, felt that a man of his stature needed a more regal and stately abode. Even though he would only live there for a few days during the year.

It shall be built on the Bellevue hill

Karl Johan chose the Danish-born architect Hans von Linstow to design his future Oslo residence, and it is said that the king chose the location himself. As a general from the battlefield, proudly mounted on his horse, he had an eye for finding elevated spots in the terrain, where he could monitor the battle and command his troops. And right in the middle of today’s Oslo, he found his preferred spot, atop the Bellevue hill.

Grand plans were followed by a lack of funding

Although the Swedish king was the one to commission the palace, it was, of course, the Norwegians who had to pay for it. Karl Johan and his architect had grand plans, but the Norwegian finances were in a poor state. As the planning process progressed, and the building process got drawn-out in time, the design got smaller and smaller.

King Karl Johan followed the initial steps of the building process and witnessed the palace getting a roof over its head. But he died in 1844 and never saw it fully completed. It was his son Oscar I, who declared the palace open in 1849. For the next 56 years, the building was only used when the king and his entourage were in town.

So, the palace in Oslo is not the largest of royal residences, but we have Karl Johan and Hans von Linstow to thank for its magnificent location and grand impact. You can still see a statue of Karl Johan on his horse towering in front of the main facade, overlooking Oslo’s principal street, which still carries his name.

The Norwegians only call it Slottet – the palace – and most of them regard it as the nation’s home. Not least because of the three loyal monarchs who have lived there since Norway’s full independence in 1905: Their Majesties Haakon VII, Olav V, and Harald V. As an immigrant family they are living proof of something important: it is not where you come from that matters, but who you are, and how you treat your fellow man.

Suggested next read:
Queen Maud of Norway | her background and childhood years

or:
Folk tales | Pesta and the Black Death | Norway

Graveyard inequality | once a pauper – always a pauper | Norway

It is said that all people are equal in Heaven. But the historical churchyard shows us that no such equality applied here on Earth.