For many, it may come as a surprise that the history of rose painting and its place in Norwegian folk art is not as old as one might think. Nils Ellingsgard, born in 1928 in Ål in Hallingdal, is a Norwegian authority on the art of decorative painting – or rosemaling. Through his gem of a book, Norsk rosemåling, we get a better understanding of this world of artistic beauty.

In Norway, the more widespread tradition of rosemaling did not take hold until well into the 1700s. Painter and author, Nils Ellingsgard, has chronicled the journey of the art form. Let us take a look at what he found.

Let us start by taking a look at what Norwegian society looked like in the early 1700s.

At the beginning of the century, Norway had a population of a mere 500,000 – with only 40,000 people living in what was defined as urban areas. It was a society based on the age-old ways of agriculture, fishing and hunting – and people lived on farms or in cottages scattered across the long-stretched landscape.

It can be argued that for some isolated parts of Norway, the Middle Ages lasted well into the 1700s.

Since then, the change of Norwegian society has been immense. Today, the Norwegian population has exceeded the five million mark, with 80% residing in towns and cities.

During the 1700s, the effects of the European industrial revolution gradually also made its way to this Northern outpost, with increased trade and prosperity. In its wake, followed changes to people’s living conditions in general and to the type of houses that people lived in.

All through the Middle Ages – and in certain parts of Norway well into the 1700s and beyond – the typical farmhouse was a single-storey log building with no windows, a so-called årestue. The main room – and often the only room – had an open and slightly elevated fireplace in its centre – it had an earthen or stone floor – and a smoke vent in the roof, a ljore. The upper part of the room was black from soot. The only outside light would come through the smoke vent, which in earlier times consisted of a transparent cow’s stomach stretched over a wooden frame – or the main entrance door.

As a result of the smoke, there was no attic in the main house. The adolescent children and the servants often slept in the loft above the cowshed or similar; no doubt a cold experience during the hardest part of the winter.

Many of the early emigrants who left Norway for America in the 1800s would have known such buildings and people who had lived in them. The use of the årestue lasted the longest in the western parts of Norway. Buildings built in the style of a årestue would also later be used as the bryggerhus – the wash-house – in many places.

It is in this context and under these living conditions that we have to set our understanding of Norwegian folk art. With new ways of building houses emerging – and with closed fireplaces and chimneys – also came an increased opportunity to decorate the inside of the rooms and to fill the rooms with beautifully painted objects. 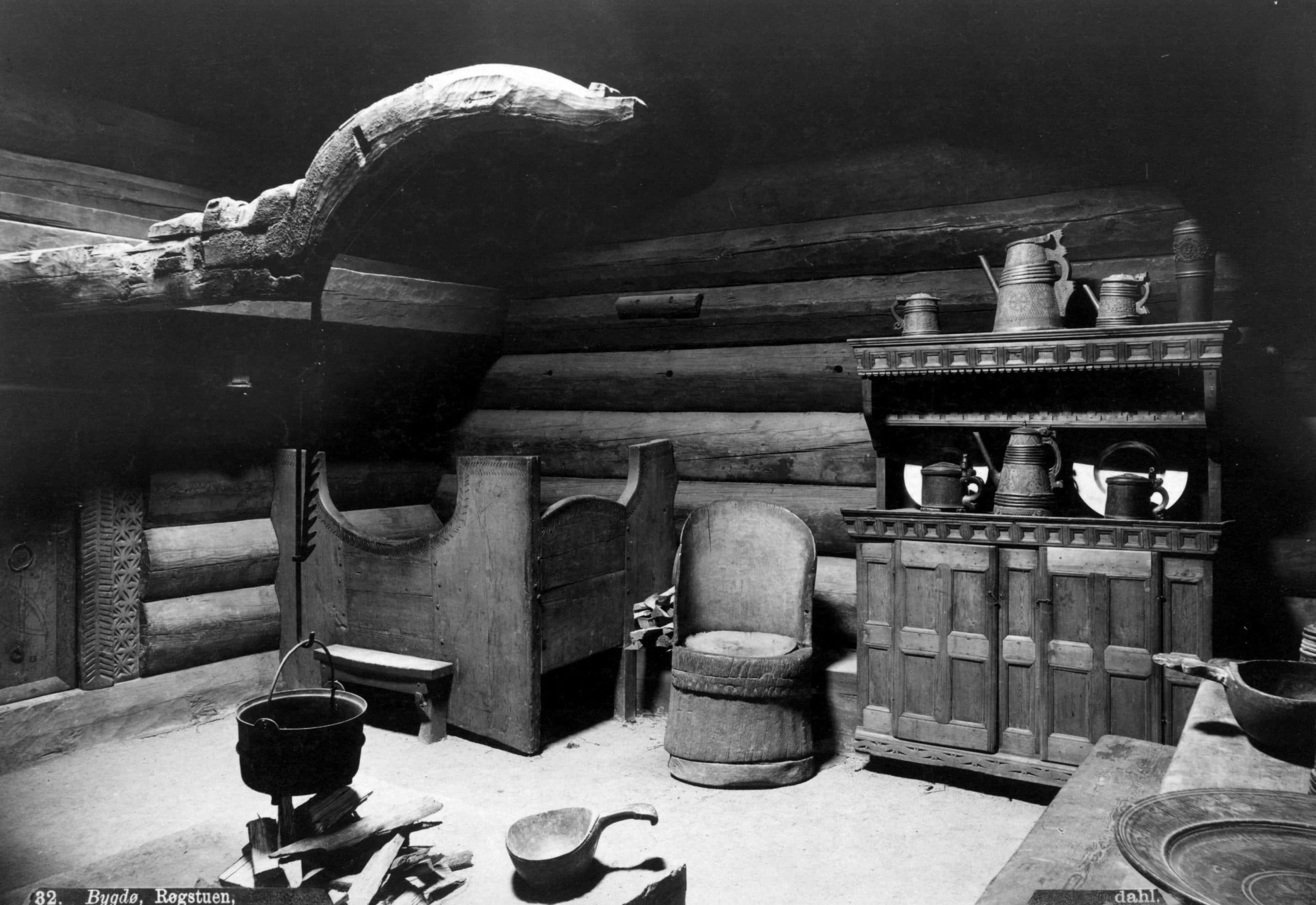 Compared to the art of woodcarving and textile art, rosemaling is a much younger art form, at least on a larger scale. It had its first golden age between the mid-1700s and the mid-1800s, very much as a result of the mentioned increase in living standards and art influences coming from the European continent.

In earlier times, colourful woven fabrics were displayed on walls et cetera during the festive periods of the year.

As the home crafts movement took hold in the early 1900s, the art of rose painting had a renewed renaissance. It has a solid standing in the Norwegian psyche even today, being very much a symbol of the old world, known by today’s mature generations through their great-grandparents and grandparents, who were really the last generations of the ancient Norwegian farming society.

There is no absolute conclusion on the origin of the term rosemaling – rose painting – but it is believed to stem from the bloom of the same name. The rose is also a key motif in many of the many beautifully decorated artefacts from this period. In many of the Norwegian dialects, words like rosut, rosete or rosa mean decorative or decorated. A rosut cow would, for example, be a cow with spots in different colours.

Rose painting is by no means a typical Norwegian art form. In most European countries, the rural communities would decorate objects and the inside of their homes with such decorative painting. The origins of the motifs often stem from the central cultural hubs of Europe, but the local variations flourished – and very much so throughout the often relatively isolated rural communities of Norway.

As a result of a scattered population, and long distances between the communities, a wealth of variations can be found from that first 100-years-wave of this art form.

Decorative art prior to the 1700s

Decorative painting was by no means a brand new art form even in a Norwegian historical context. It was more the widespread extent of such an art form that took hold in the 1700s.

After Norway had been christened, at the turn of the first millennium, decorative painting could be found in the Catholic churches throughout the Middle Ages, depicting religious scenes. After a temporary setback following the Protestant Reformation in the 1530s, decorative painting in churches gradually regained its popularity throughout the 1600s.

Painted objects could be found in private homes also prior to the 1700s, but not to any great extent. In earlier times, the paint was expensive and not so easily obtained by the ordinary classes. As the industrial revolution gradually took hold, so did the mass production of paint – which made it more accessible. 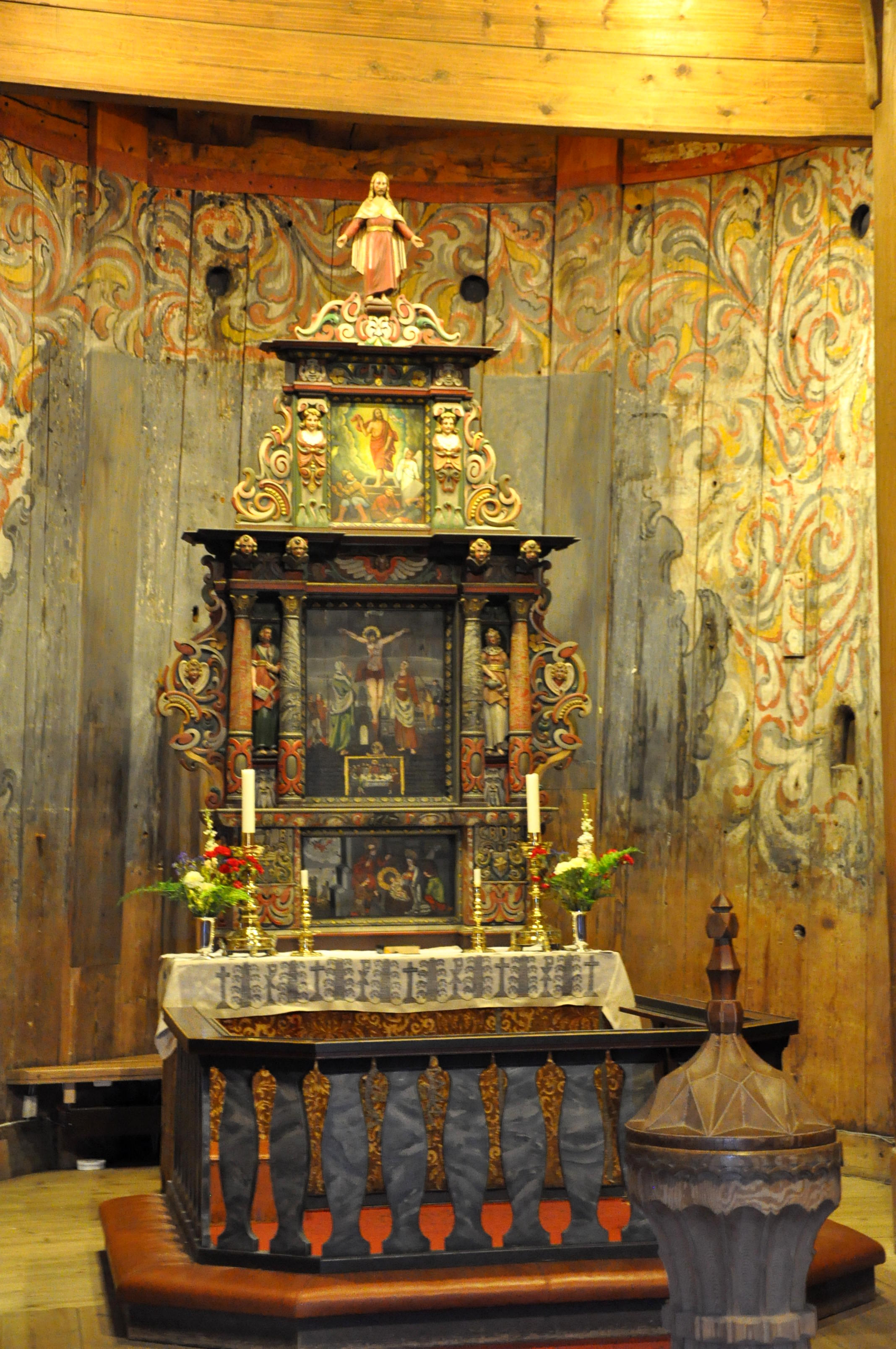 It started in the east

The first wave of local rose painting started in the south-eastern parts of the Norway. But even here, very few examples of a fully decorated interior of a room can be found dated prior to 1750. Only towards the end of that century, and at the beginning of the 1800s, did it become common to decorate walls and ceilings.

Local painters and styles gradually developed and many of the skilled painters travelled across the country and brought their very own styles with them. In many places, the methods of painting can tell us a lot about from where in the country the painter hailed.

The early rose painters were seen more like craftsmen than artists. Very often they would have other skills, like carpentry and woodcarving. The rose painter could usually both read and write and would often play a role in spreading knowledge through their art.

Rose painting can be found in most parts of the country, but the intensity varied a lot from district to district. The communities to the east and the south of the mountain range stretching through the middle of the country, going from the south to the north, and the areas of Rogaland and Hordaland, had the most significant influence. It was in these areas that the local styles developed most clearly.

In Trøndelag there was a centre around the area of Oppdal.

Along the western coastline, the art form was a lot more limited. Here we mainly find decorated objects like chests, cabinets and drinking bowls. One reason for this may have been the fact that the årestue house type was in use much longer in this part of the country. The few rooms that were decorated in the west were guest rooms with no fireplace.

In the northern parts of Norway, the art of rose painting was even more limited.

Throughout the second half of the 1800s in particular, there was a vast wave of emigration from Norway to the new world of North America. The many emigrants brought with them many objects with the most beautiful decorations.

No doubt, the large rose painted chests that many brought with them across the Atlantic Ocean must have been symbols of pride and of cultural wealth – even if the monetary wealth was not always so great. These objects must have provided a great connection to the past, and to the people and the culture they had left behind. Most of the emigrants would never see their homeland again. As the years went by, there would be graves on both sides of the Atlantic; lonely graves, silent symbols of longing and of heartache, for the loved ones living so far away.

For the many descendants of Norwegian emigrants, these old decorated objects – which have been passed on as heirlooms from generation to generation – are valued symbols of beloved family members – and tangible artefacts linking them to the culture from whence their people once came.

Many of the skilled rose painters also left the old country and travelled across the ocean. With them, they brought the art of rosemaling – and many continued their work in the new world. Per Lysne (1880-1947) is deemed to be the father of rose painting in America. He was born in Lærdal, Sogn og Fjordane – and emigrated to Stoughton, Wisconsin in 1907. Finding himself out of work during the great depression, he started painting objects on a larger scale and managed to make a living out of it for himself and his family. 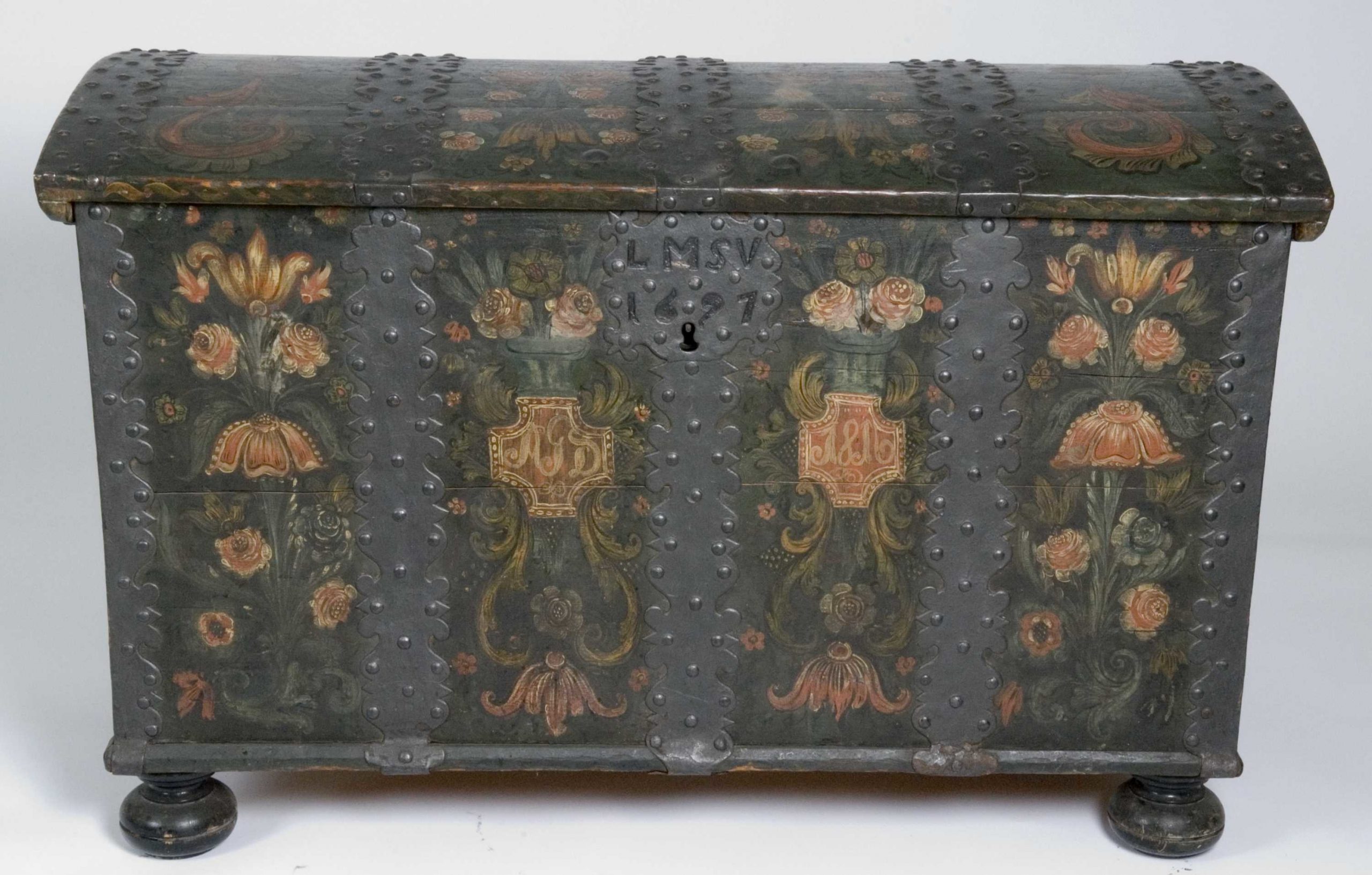 From 1950 onwards there has been a third wave of interest for rosemaling and its beautiful colours and motifs. Courses have been held, and many people have found an artistic outlet through this art form.

Whether the traditions will continue to bloom is difficult to predict, but the many surviving objects will stay on and give joy to future generations for centuries to come. Objects that are symbols of our common history – and the many people who created them.