Reindeer | an ancient presence in the Norwegian mountains

When the ice melted after the last ice age, herds of reindeer followed in its wake. And with the animals came their main predator: the humans.

The last ice age ended some ten thousand years ago. The early Norwegians were hunters and gatherers. Archaeological finds show that the reindeer was a primary prey. The reindeer thrives in a tundra-like landscape, making the Norwegian mountains and highland plateaus its perfect habitat.

The humans moved with the animals

The reindeer is a migratory animal – moving between seasonal feeding and birthing grounds. The early human family groups followed the reindeer on its journey. The animal provided food and warm clothing in a harsh environment.

We call the female reindeer a cow (simle), the male a bull (bukk), and the young a calf (kalv). The species live in herds and can reach an age of up to 18 years. The birthing season is in May-June, and the cow gets typically one calf only. Both the female and the male grow antlers – and develops and loses a new set every year. The bull loses the antlers in the autumn – after the mating season. The cow, however, keeps her antlers until after she has given birth in the spring. This gives her the upper hand all through the winter when competing for food with the males and young individuals.

The coat is white-grey-brown and particularly dense. This allows the animals to live under cold weather conditions – minus 40 degrees centigrade and more. Evolution shaped the reindeer’s cloven hoofs in a way that makes it easier to walk on snow during the winter – and on marshland during the summer. The hoofs are also adapted to dig for food through the snow. Sometimes, the reindeer gnaws on shed antlers found on the ground, or even antlers still on a fellow reindeer. Probably in an attempt to stock up on minerals and nutrients.

The abundance of summer

After the long winter – often with snow for as long as 8 to 9 months – comes a short and intense summer. There is full daylight almost 24 hours a day. The animals feed on fresh herbs, grass, and available bushes. To survive the winter, they have to eat as much as possible. Swarms of insects plague the herds. Often, the reindeer seek areas with remaining snow patches – places where they can rest and be away from these relentless tormentors.

In late September and in October comes the mating season. The bulls fight each other, and the victorious individuals gather their herd for mating.

With winter comes snow and darkness

During the winter, the reindeer seek areas where the snow is not too deep. The primary winter food is lichen – a plant-like and rootless organism that grows on rocks and trees. The animals also eat dry grass, leaves, moss – and from available bushes. In bad weather, the reindeer lies down and lets the snow build up around it. Some individuals will often remain standing, fronting the group and facing the wind. Maybe to make sure that there is no danger ahead. After a while, they go to the back of the herd and lie down to rest too. The first winter is often a make-or-break for the calves born in the spring.

The Norwegians of today differentiate between wild and domesticated reindeer. Today, we predominantly find the wild reindeer in the mountains located in the southern half of the country. The animals are still hunted in an annual hunt, lasting from late August and through September. No person owns these wild animals – but the right to hunt them follows land ownership and other ancient hunting rights. In 2018, the number of wild reindeer totals roughly twenty-five thousand.

The Sami people and the half-domesticated reindeer

When what today is the Norwegian majority became farmers – sometime during the Stone Age – the Sami minority persevered in their ancient way of life, relying on the reindeer as their primary source of food and clothing. A few hundred years ago, they started herding the animals more actively – and continue to do so even today.

The reindeer-herders and their families kept on moving with the animals, following age-old migration patterns, actively cultivating the herds and creating a more stable and predictable food supply. Although still roaming freely through the landscape all year round, the Sami reindeer are usually referred to as domesticated. A more appropriate term would possibly be herded semi-wild reindeer. 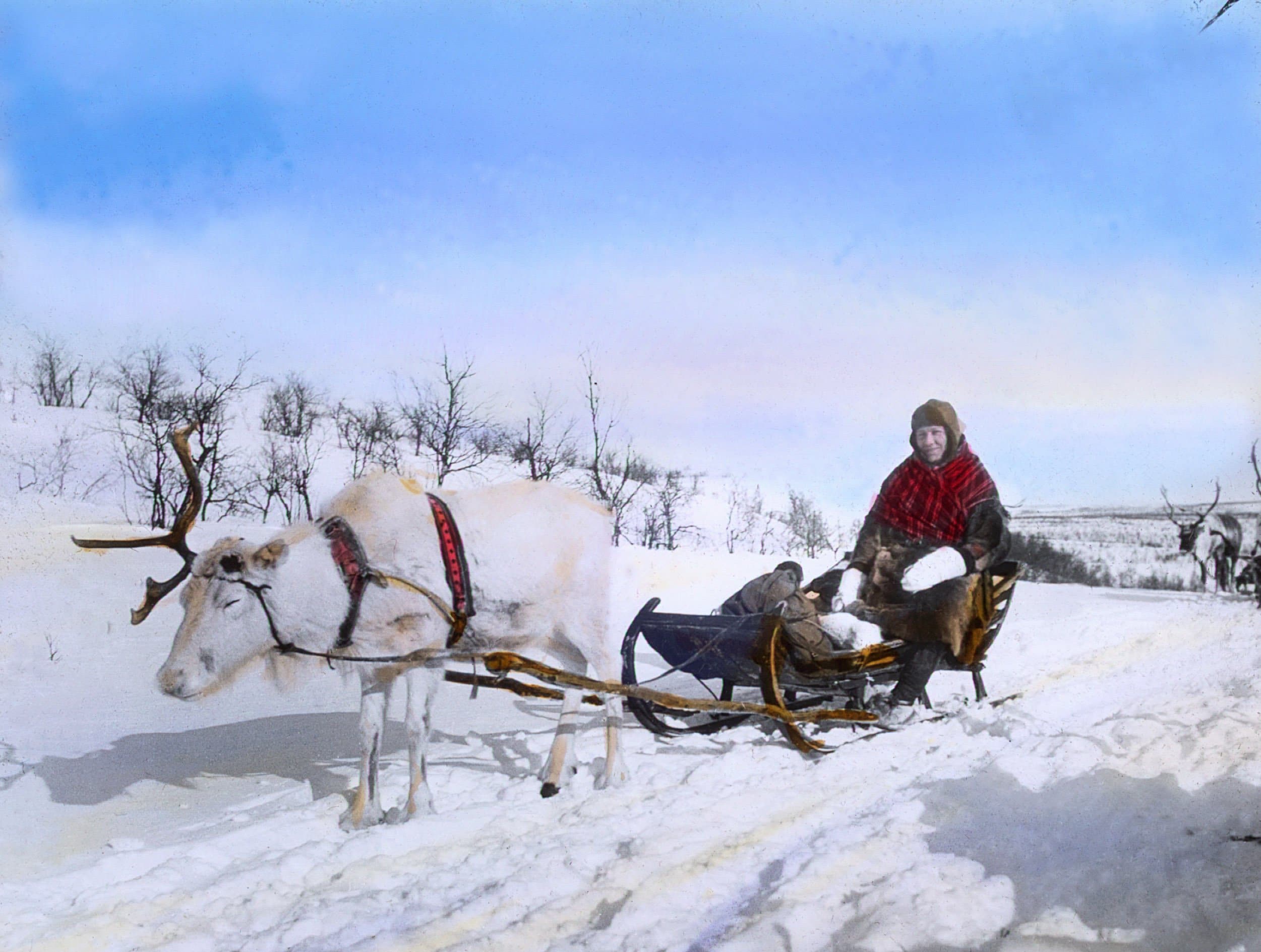 We find around seventy-five per cent of the two-hundred-and-fifty thousand herded reindeer in Norway’s northernmost region, Finnmark. But herds also exist as far south as in Hedmark and Oppland. Historically, the Sami also kept some truly domesticated individuals. The families used the animals for transportation – but also for the cows’ milk.

Today, in addition to the humans, the reindeer’s main predator is the wolverine. This is a relatively smallish animal with the ability to kill prey many times larger than itself. The golden eagle also poses a threat. The wolf is primarily a forest animal and is in parts of Norway less of a danger.

During the birthing season, the animals are particularly vulnerable. When the cow is preparing to give birth, she usually moves away from the herd – looking for the part of the terrain that offers the best protection. After the calf is born, the mother eats the afterbirth to avoid attracting predators. The newborn calf has a colour that makes it difficult to spot in the landscape. If it senses danger, its pulse will weaken and it will lie completely still and be almost smell-free. The calf is usually able to stand upright less than an hour after it was born.

END_OF_DOCUMENT_TOKEN_TO_BE_REPLACED

END_OF_DOCUMENT_TOKEN_TO_BE_REPLACED
Go to our homepage