Quiz vol. 1 | what is the name of the capital city? | Norway

Do you know the name of Norway’s capital city? Test yourself, friends, and family in this 10 multiple-choice questions quiz vol. 1. See the correct answer below each photo.
LA Dahlmann | talk NORWAY 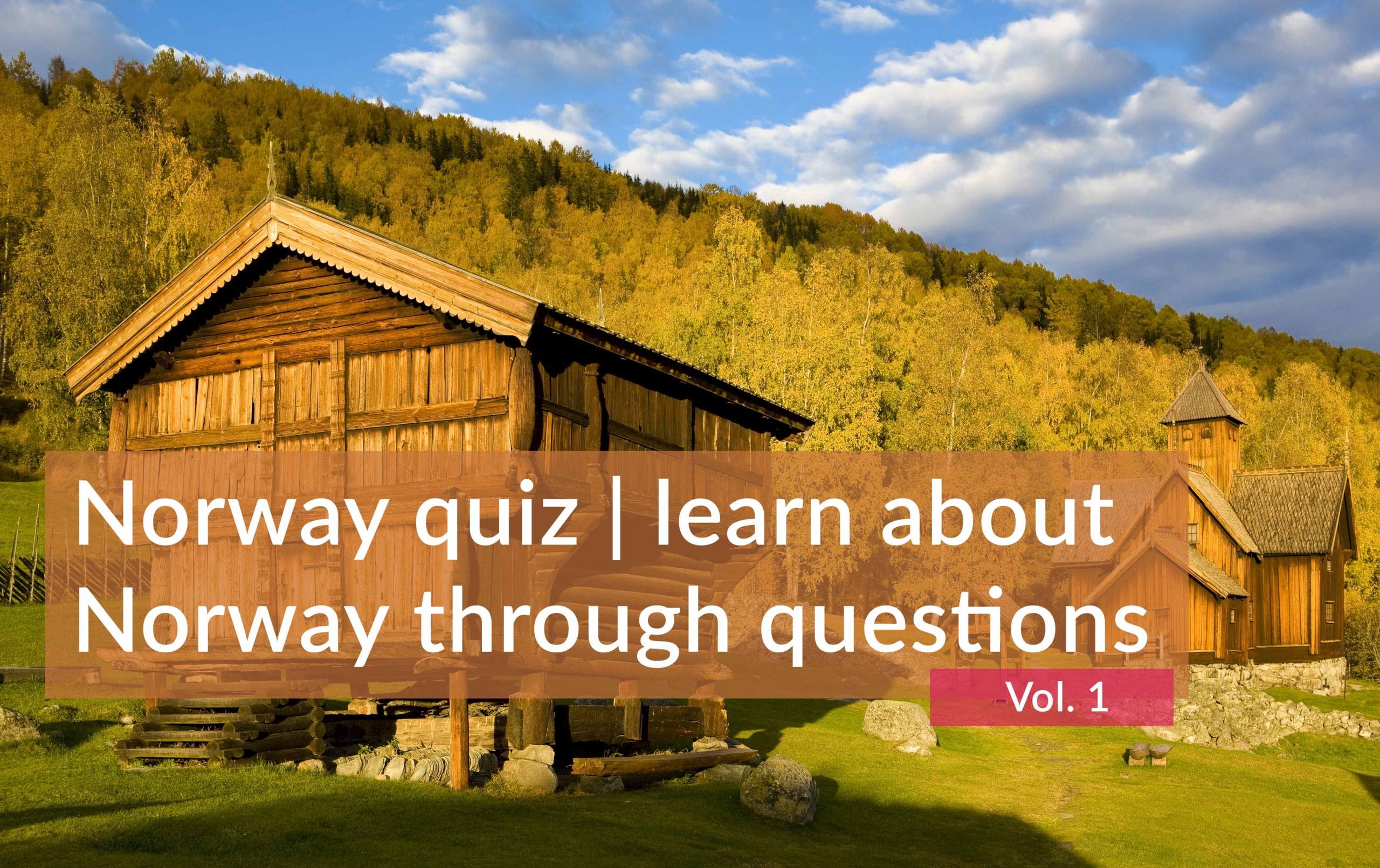 What is the name of the capital city of Norway?

The correct answer is: Oslo.

Oslo is the capital city of Norway. After the birth of the modern-day Norwegian national state, in 1814, the city became home to Norway’s key institutions: the royal house, the parliament, the high court, its government, and its university. Today, Oslo is Norway’s largest city, and has a population of around 700,000. In the 1769 census, the city had only 7,496 inhabitants. The name Oslo is believed to mean the flatland of the gods – or – the flatland under the hill. According to the sagas, the city was established in AD 1050, but people lived here even before that time.

Oslo is a perfect and relatively tranquil travel destination. Unless you are a winter person, the best time to visit is between mid-May and mid-August. If you visit Oslo on Norway’s national day, 17 May, you can see the king and the royal family wave from the palace balcony, for hours on end, as the school-children’s-parade pass by with cheers and song. In Oslo you can visit the Norwegian museum of cultural art, and the Kon-Tiki museum, see the Viking ships, and so much more.

What is the name of Norway’s currency?

The correct answer is: Krone – which means crown.

Although four completely separate currencies, Norway shares the currency name with its neighbours Sweden, Denmark, and Iceland. The Norwegian Krone was introduced in 1875. 1 Krone consists of 100 Øre. The currency consists of both notes and coins. During world War 2, the German occupational forces excluded the royal crown from the coat of arms imprinted on new coins. Norway’s exile government in London, however, included it. The London coins are highly sought after by collectors. In writing, the krone is noted as NOK internationally – and usually as kr. locally. Today, most Norwegians primarily use bank cards or payment apps in their everyday life. The safest card to bring with you when travelling to Norway is a Visa debit card. Credit cards are widely accepted, but not everywhere.

In which time zone is Norway?

The correct answer is: GMT/UTC +1 hour – which is the same as Central European Time (CET).

Once upon a time – a bit simplified – it was decided that The Royal Observatory in Greenwich in London was the centre-point of time – The Greenwich Mean Time (GMT). Today, this centre-point is usually referred to as The Coordinated Universal Time (UTC). The time in the rest of the world was relative to this centre-point. When we say that Norway is GMT/UTC +1, it means that when the clock is 12.00 in London, it is 13.00 in Norway. The country has only one time-zone, and is in the same zone as most of Europe. It should be noted that Norway currently practises Daylight saving time, between March and October. During this period, the time is GMT/UTC +2 – also referred to as The Central European Summer Time (CEST). There are talks of dropping the Summer Time at some point in the future.

What is the name of Norway’s northernmost city?

The correct answer is: Honningsvåg.

Honningsvåg is Norway’s northernmost – and the world’s fourth northernmost – city. It is located in the region of Finnmark, and has a population of about 3,000. The map coordinates are: 70°58’56.3″N 25°58’12.7″E. The city calls itself The city by Nordkapp. Nordkapp is the name of the municipality, taken from the name of Norway’s and Europe’s northernmost point. The Northern-Sami name of the city is Áváhki or Honnesváhki. Honningsvåg is one of the ports of the coastal cruise-line Hurtigruten. The landscape and the ocean is spectacular, but travel in the summer, unless you are looking for the might of the winter and the northern lights. You can find more interesting information at visitnorway.com.

From which Norwegian region does the US western-actor James Arness’ family hail from?

James Arness’ grandfather emigrated from the community of Sykkylven in the region of Møre and Romsdal, on the mid-western coast of Norway. Read more in our post James Arness | western hero and Norwegian viking.

What is the name of Norway’s longest fjord?

The correct answer is: The Sognefjord.

The Sognefjord is, with its 205 kilometres and many arms, Norway’s longest fjord – and the world’s second largest fjord, next after The Scoresby Sund on Greenland. At its deepest, The Sognefjord is 1,303 metres – but at its mouth, only 200-300 metres deep. The fjords are in reality valleys flooded by seawater. Tourists flock to this majestic landscape every year. Find out more about the beautiful Sognefjord by visiting visitnorway.com.

What Norwegian painter created the famous painting “The scream”?

The correct answer is: Edvard Munch.

Edvard Munch (1863-1944) was a Norwegian painter. His maybe most famous work worldwide is the painting The Scream. Munch made several versions, the first one in 1893. The work can be found both at The National Museum of Art, Architecture and Design – and – The Munch Museum, both located in Oslo. On the surface, Munch’s paintings, lithographs, and drawings may seem simple and childlike, but we strongly recommend that you visit the Munch Museum when visiting Oslo. You may be surprised at the profound effect his body of work may have on you. You can read more about The Munch Museum here.

From which Norwegian region does the actress Renée Zellweger’s family hail from?

The correct answer is: Finnmark.

Finnmark is Norway’s northernmost and largest region, but has the lowest population. The Northern-Sami name is Finnmárku. To the north is the Arctic Ocean, to the east the Barents Sea and Russia, and to the south Finland. Finnmark is a key section of the Sami cultural territory – Sapmi – which stretches from mid-Norway and across Sweden, Finland and Russia. The Norwegian Sami Parliament is located in the Finnmark community of Karasjok. The coastal areas have an arctic climate, the eastern areas are described as a stone desert, the western areas as alpine, and the inland Finnmark plateau has a dry, undulating landscape, with winter temperatures as low as minus 30 degrees Centigrade and more.

Which only country has a coastline longer than the Norwegian?

The correct answer is: Canada.

Read more about the Norwegian coastline in our post Norway facts | the second longest coastline in the world.

What is the largest land-based wild animal in mainland Norway?

The correct answer is: The Scandinavian moose.

Read more about the Norwegian moose in our post Norway moose | calf saved from drowning in 1939.

Bonus question: Can you name at least one of the 7 Norwegian dog breeds?

The 7 Norwegian dog breeds are: