Muskox | a newcomer in the Norwegian landscape | Norway

The Norwegians rarely allow alien species into their fauna. With one notable exception, the muskox - first welcomed in from Greenland in 1924.
LA Dahlmann | talk NORWAY 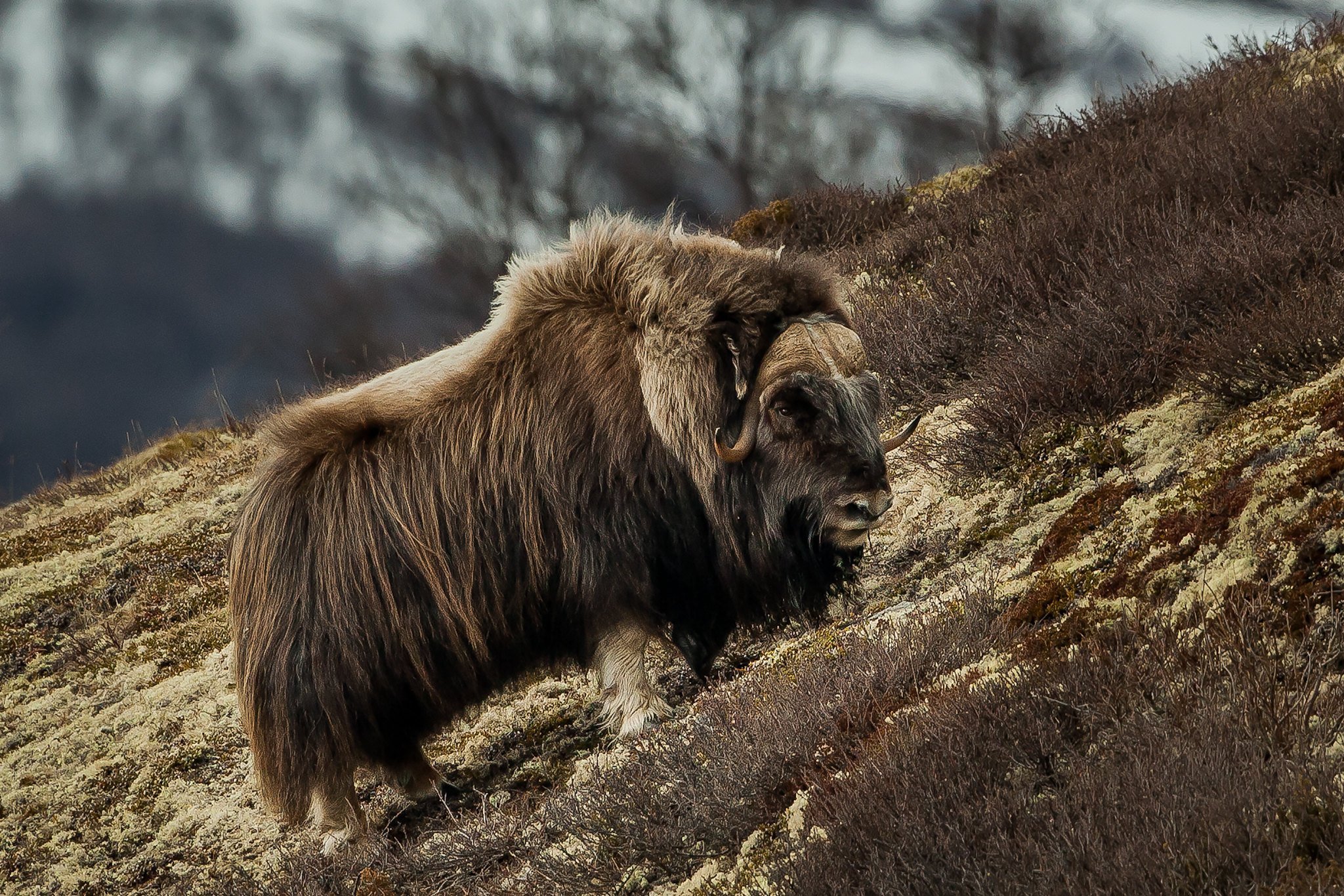 A muskox in the Dovre mountains. | Photo: Per Harald Olsen - NTNU cc by.

Muskox history stretches far back, to the temperate highlands of Central Asia. Later, the animal adapted to a colder climate, and made the Arctic and permafrost tundra its prime habitat. From Asia, the species expanded both westwards and eastwards, following the glacier-edge as it moved north and south through the ice ages.

The Norwegians call it moskus

With its curved horns, solid forehead, and thick- and long-haired coat, the muskox even looks ancient – as old as the mountains. The Norwegians call it moskus – or moskusokse.

Muskox remains have been found in the Norwegian landscape – but they predate the end of the last ice age, and thus human history in this part of the world. Still, it is reasonable to believe that the species was known to Norwegian hunters and explorers, whose Arctic travels go back a thousand years and more.

Was in danger of becoming extinct

For millennia, the muskox was found in sections of Europe, Asia, North America, and on the island of Greenland. But by the 1920s, the species had disappeared from most of these areas, except for some remaining herds in Arctic Canada, and on Greenland.

The Norwegian landscape may not be the ideal muskox habitat, but the Norwegians still wanted to help save and strengthen the species. With Norway’s long-awaited independence in 1905, came also the search for new national symbols. The muskox, with its look of history, was a perfect match. This, in addition to the finds of ancient bones, may well have been an added motivation when deciding to introduce the species into the Norwegian fauna.

Between 1924 and 1927, 12 individuals were taken from Greenland to the Norwegian island of Gurskøy, southwest of the city of Ålesund. Sadly, they all perished within a few years.

If at first you don’t succeed

In 1932, a second attempt was made. This time, 10 individuals were released into the mountainous region of Dovre, located in the central parts of Norway. Later, two more individuals were added to the stock.

The Dovre mountains are like a massive fortress, a mighty vault safeguarding the very essence of Norway’s folklore and history. Mythologically, it was the perfect location for a muskox habitat.

This first Dovre-stock survived into the war-years, between 1940 and 1945. However, these were difficult times, and the animals were hunted, and sadly all eliminated.

Between 1947 and 1953, there was a third and successful attempt, again at Dovre. 21 Greenland muskox individuals were released. Despite a slow start, and many setbacks over the years, the animals have since survived, thrived, and multiplied. In 2019, the Dovre stock counted 237 individuals.

Straying individuals have also migrated east, and established a small presence on the border with Sweden, in the regions of Femundsmarka and Härjedalen.

The muskox may attack you

It is possible to see this beautiful creature in its natural habitat, but we strongly recommend that you do it via a guided tour. Unlike similar types of species, the muskox does not necessarily flee when feeling threatened: it attacks. Being attacked by a furious muskox is highly dangerous; a situation that you would not like to find yourself in. Heed all local advice – and be safe rather than sorry.