Magne Løvstuen and his family adopted this moose calf after saving it from drowning in Lake Mjøsa. 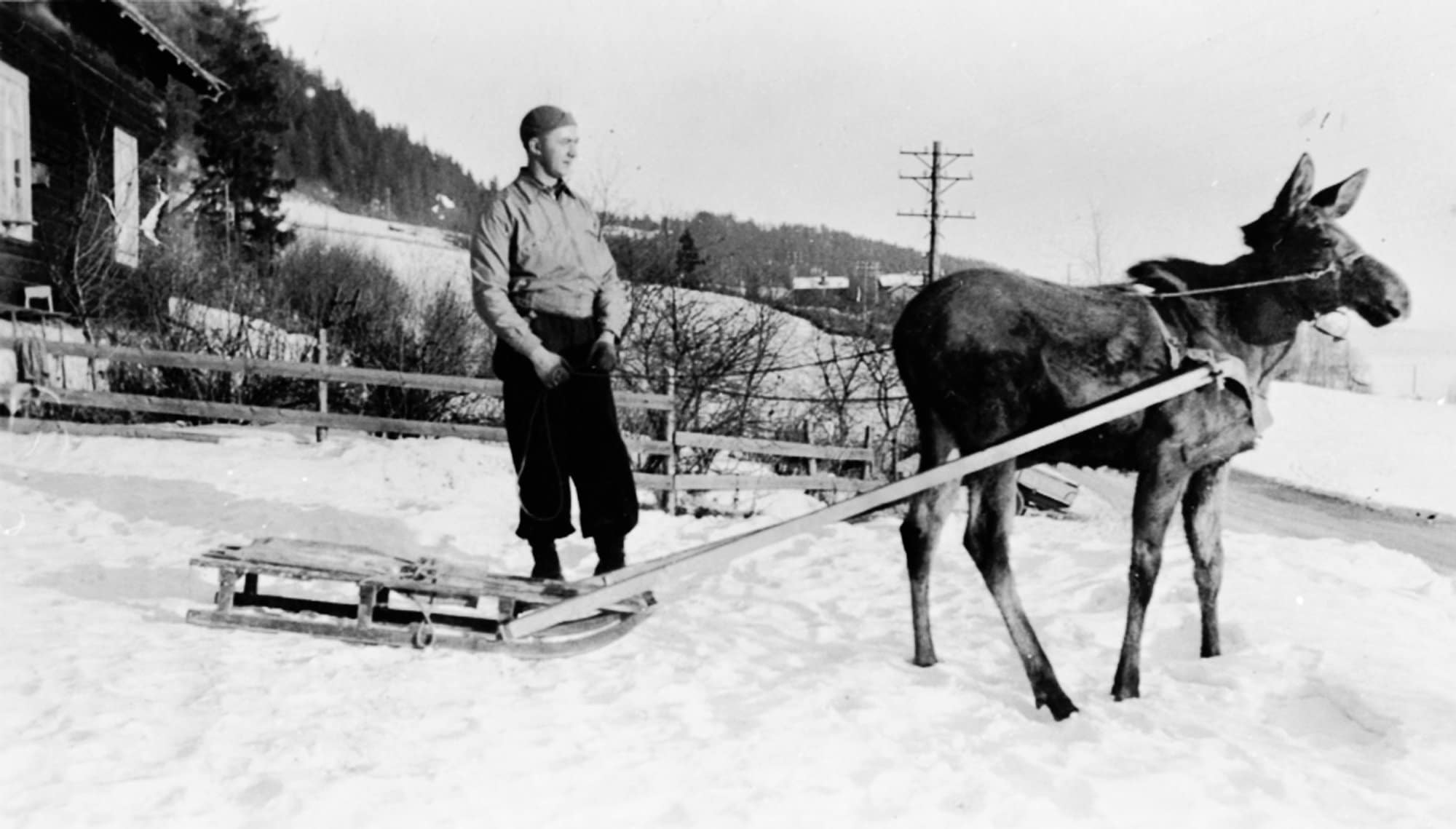 The moose is a good swimmer. But this young calf encountered problems as it set out to swim across Norway’s largest lake – Mjøsa. The year was 1939, and the location Løvstuen, Brøttum, Ringsaker, Hedmark, Norway. Judging by the photos below, the calf was born in the spring of that year. Løvstuen is a smallholding right at the water’s edge. You can still see the houses when driving north from Moelv towards Lillehammer – or when passing by on the PS Skibladner – the white swan of Mjøsa. PS Skibladner is Norway’s oldest and only remaining paddle steamer still in operation.

The details are few, but maybe strong water currents separated the calf from its mother. Or perhaps she lost her life trying to get her bairn to safety. Lake Mjøsa leads melting water from the mountains and the river systems to the north – down to the rivers Vorma and Glomma further south. During spring and early summer, flooding and strong currents make life difficult for both animals and humans.

Taken in by kind people

What we do know, is that Magne Løvstuen and his family adopted the baby moose. And a good home they must have created for it. The rascal looks both calm and safe. But we do not know what happened next. The moose is Norway’s largest land-based animal, and maybe the family released it back into the wild when it was older and more independent. What is clear, however, is that the domestication of the Norwegian moose never quite caught on. But no one can say that Magne Løvstuen didn’t try.

Some facts about the Norwegian moose

Elgen – the moose – is the largest animal roaming the Norwegian landscape. The Norwegians call it the king of the forest. The early Scandinavians were hunters and gatherers, and the moose hunt is still a big annual ritual. It starts in late September and lasts through the month of October.

Although a shy animal, you can sometimes come across an individual or two when out walking in the forest. Or see them grazing in an open field. Generation after generation, the moose follows old paths through the landscape. Unfortunately, modern-day roads and railroad tracks do not scare the animals from crossing. When driving through Norway, you regularly see danger signs, marking high-risk areas. The animal often moves at dawn and dusk. These are the times of day when car and train drivers are particularly vigilant. Every year, accidents involving the moose take both animal and human lives.

END_OF_DOCUMENT_TOKEN_TO_BE_REPLACED

END_OF_DOCUMENT_TOKEN_TO_BE_REPLACED
Go to our homepage