Klippfisk - or klipfish - is fish preserved through salting and drying. Since the early 1700s, the Norwegians have been large-scale klippfisk producers and exporters. 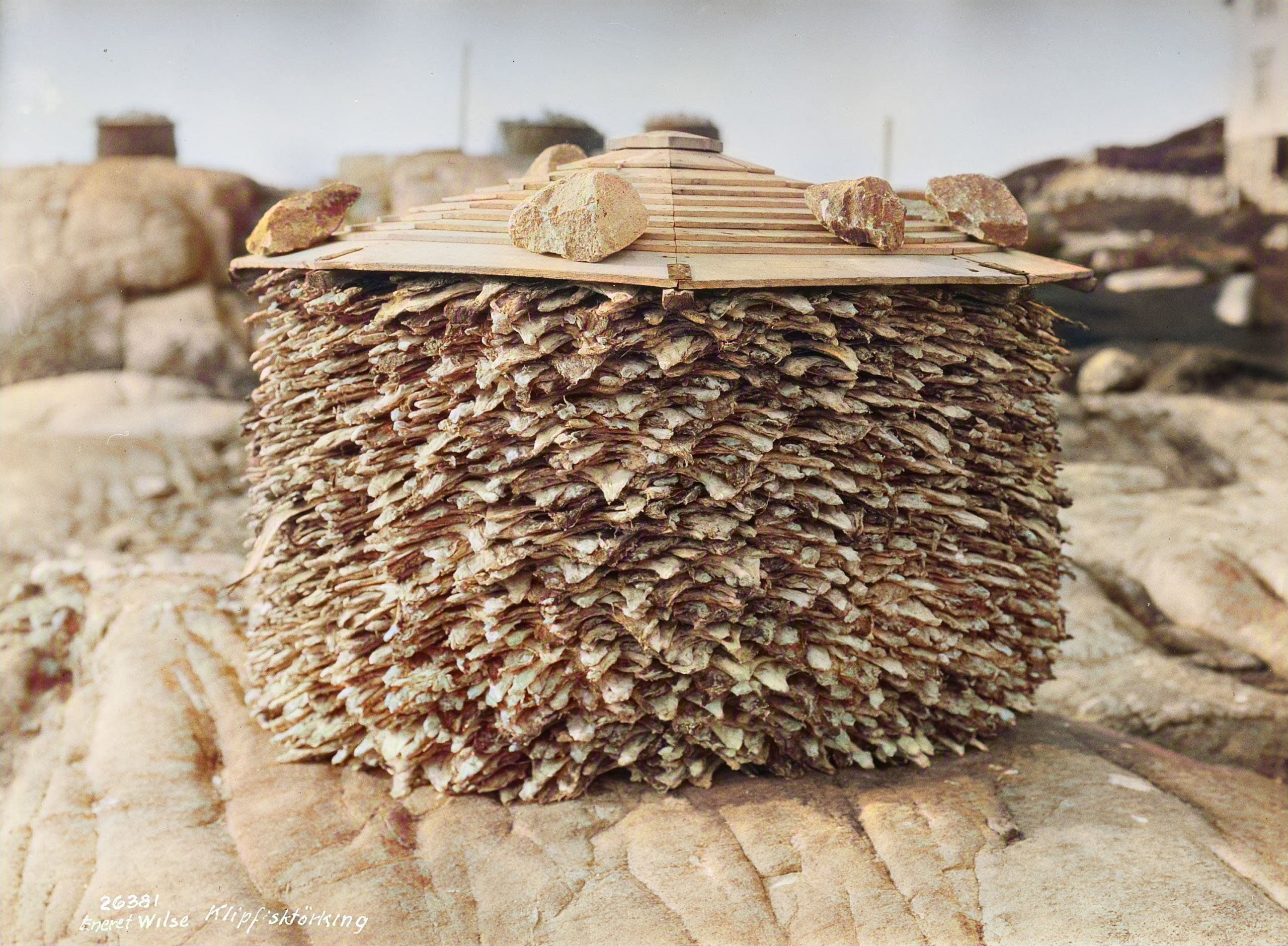 Can be stored for years

Fresh fish is highly perishable, but when dried it can be stored for years. Drying food is one of mankind’s oldest preservation methods, and for our ancestors, it made everyday life a lot more predictable. It also created possibilities for trade and long-distance transport. The drying process removes the water from the fish-meat, which again stops the growth of destructive microorganisms. The Vikings, to name one historical group of people, brought dried fish with them on their long-haul journeys; for food and trade. The Norwegians have produced and traded unsalted dried fish – tørrfisk – for two thousand years and more.

A second preservation method is to cure fresh fish by using salt. The salt also draws moisture out of the fish-meat and stops microorganisms from multiplying.

Did you see this one?
Strandsitter | is Norwegian for a beach dweller | Norway

Most Norwegians have heard about tørrfisk – dried fish or stockfish – and some about klippfisk. But they don’t always know the difference. The word klipp comes from the old Norse klepp, which means bare coastal rocks – svaberg. The difference between the two is quite simple: tørrfisk is dried fish without any use of salt – and klippfisk is fish that is both salted and dried. Cod is the most commonly used fish-type for these purposes.

When we hear that cod is called bacalao in Spanish and bacalhau in Portuguese, many will start seeing a connection between the Norwegian klippfisk and popular codfish dishes on the Iberian Peninsula and beyond.

The first large-scale makers of salted and dried bacalhau are believed to be the Portuguese, when fishing off the coast of Canada in the 1500s. The fresh fish had to be preserved before the long journey home. And they managed to do this by combining the age-old methods of salting and drying.

Norway also has access to lots of cod from the sea off its long-stretched coastline, and in places, the weather conditions are perfect for the outdoor natural drying of fish. But it was only from around the year 1700, when large quantities of imported cheap salt became available, that both Norwegian and foreign mavericks saw great klippfisk business opportunities along the Norwegian coastline. The early settlement of what today is the mid-Norwegian city of Kristiansund, became the main hub of klippfisk-production and know-how. Today, this is also where we find the Norwegian Klipfish Museum. Historically, Spain and Portugal have been the biggest buyers of the Norwegian klippfisk. But it has also found its way to Italy – to be used in its baccalà-dishes – and to other countries around the world.

In particular, the climate and weather-conditions on Norway’s mid-western coast are optimal for the natural and outdoor way of drying fish. There is lots of wind, and the temperatures are fairly mild. The proximity to the rich ocean fish resources doubles the suitability. Historically, the main salting and drying season lasted from March to May.

The process of preserving the fish

The process of making klippfisk begins with the fish being gutted and the head removed. Then it is cleaned, and most of the backbone is taken out. This allows the fish to be folded out flat, like a triangle.

Historically, the fish was stacked in layers – in rounded outdoor piles – with salt in between each layer. A lid, with stones to weigh it down, was placed on top, and the sides of the pile were often covered by a rough material, to protect it from birds and the weather. After a few days, the fish was often turned, re-stacked, and more salt was added between the layers. The pile was then left for 3-4 weeks for the salt to do its preservation magic.

Finally, it was time to dry the fish by spreading each individual fish-triangle out onto the surrounding bare coastal rocks – the svaberg. They were left out all day, and then restacked overnight. If it was raining, the fish was left protected in the stacks. This process of stacking and laying out the fish, continued until the klippfisk was deemed ready for storage – and ultimately sale or export.

How to prepare the klippfisk before it can be eaten

The klippfisk must be soaked in water for 24-48 hours before it is ready to be used. The amount of soaking-time depends on the level of salt – and how much water you would like the fish-meat to re-absorb. Before leaving it to soak, the fish is cut into suitable pieces. The water must be changed several times during the soaking-period, to get rid of the extracted salt. Once soaked, unwanted skin or remaining bones are removed. And voila, the klippfisk is ready to be used in the many delicious bacalhau dishes.

A couple of klippfisk recipes

We leave you with a couple of simple klippfisk-recipes that you might want to try out – if some klippfisk comes your way.

And as the Portuguese say: Bom apetite!

Poached or steamed klippfisk
Ingredients: soaked-out klippfisk, water, cooked or steamed vegetables – and whatever trimmings your taste may desire.

How to prepare the dish: start by cleaning and removing skin and bone from the soaked-out klippfisk, before cutting it into smaller pieces.

Put the pieces of fish into a reasonably sized cooking pot with cold, unsalted water. Bring the water slowly to just below the boiling point, and leave it at this temperature for about 15 minutes. Serve with melted butter and the vegetables and trimmings of your choice.

Alternatively, the fish can be steamed under a lid for 25 minutes. Steamed klippfisk will have a softer consistency.

How to prepare the dish: start by cleaning and removing skin and bone from the soaked-out klippfisk, before cutting it into smaller pieces.

Cut the onions, potatoes, and tomatoes into thick slices.

Pour the olive oil into a reasonably sized cooking pot, and then build the dish in layers: fish, potatoes, onions, and tomatoes.

Blend in the cayenne pepper with the water and pour it over the ingredients.

Leave the pot to stew just below the boiling point until all ingredients are tender. Add some more water if necessary.

Shake the pot often but carefully. Avoid using a spatula or similar, as the dish could otherwise easily turn into a mash. Serve warm.

Did you see this one?
Homestead | making butter the old way | Norway

END_OF_DOCUMENT_TOKEN_TO_BE_REPLACED

END_OF_DOCUMENT_TOKEN_TO_BE_REPLACED
Go to our homepage