Horse history in the land of the Vikings vol 2 | Norway 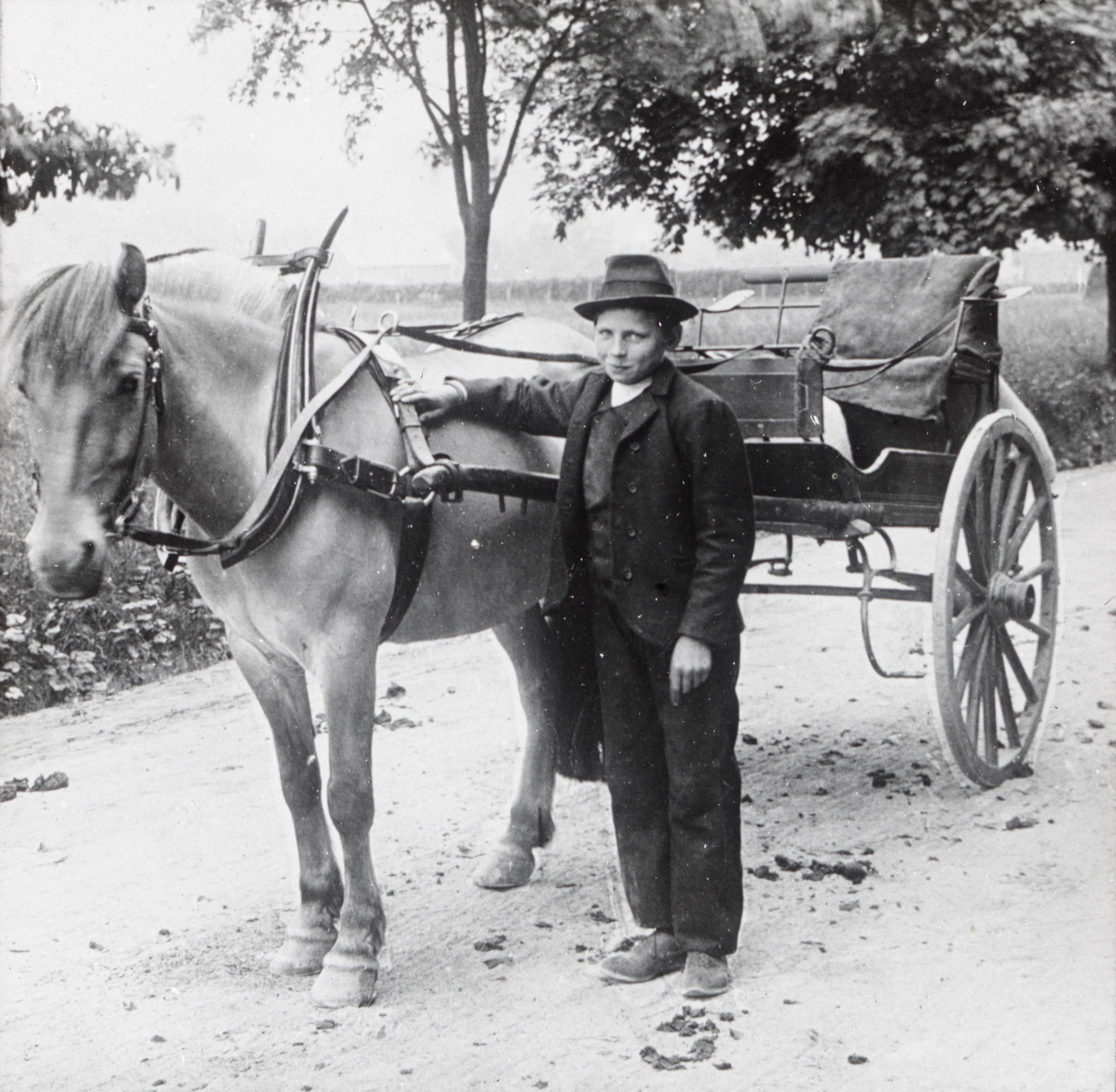 A Norwegian Fjord horse harnessed to a wagon - and a young and dapper coachman. | Photo: Anders Beer Wilse - DEXTRA Photo cc by.

Had to fend for themselves

The early Norwegians did not keep their horses fed and sheltered in a warm stable like we do today. The horses had to stay outdoors and find food like any wild animal.

During spring, summer and autumn, food was easy to find. However, the cold and dark winter months could be a testing time, even for the toughest of individuals, especially in areas where there was deep snow.

The horses would also have to defend themselves against aggressive predators, like the wolf and the bear.

A shoe made of iron

Tranquil grazing on the plains – and the occasional escape from nearby predators – was what Mother Nature had in mind for the horse’s hoof. Not carrying heavy loads on steep and rocky Norwegian paths. The role as man’s servant in difficult terrain put an enormous strain on the horse’s feet.

In earlier times, people had to bring extra horses when travelling over long distances. The horsemen had to minimise the strain on the horse’s feet by transferring the weight from one horse to the other. A lame horse could easily leave both horse and man stranded in the wilderness.

Only at the height of the Viking era, in the 900s, the Keltic invention of the iron shoe found its way to Scandinavia. The horseshoe was a master-invention. Suddenly, the horse was able to perform more work, with fewer horses needed. 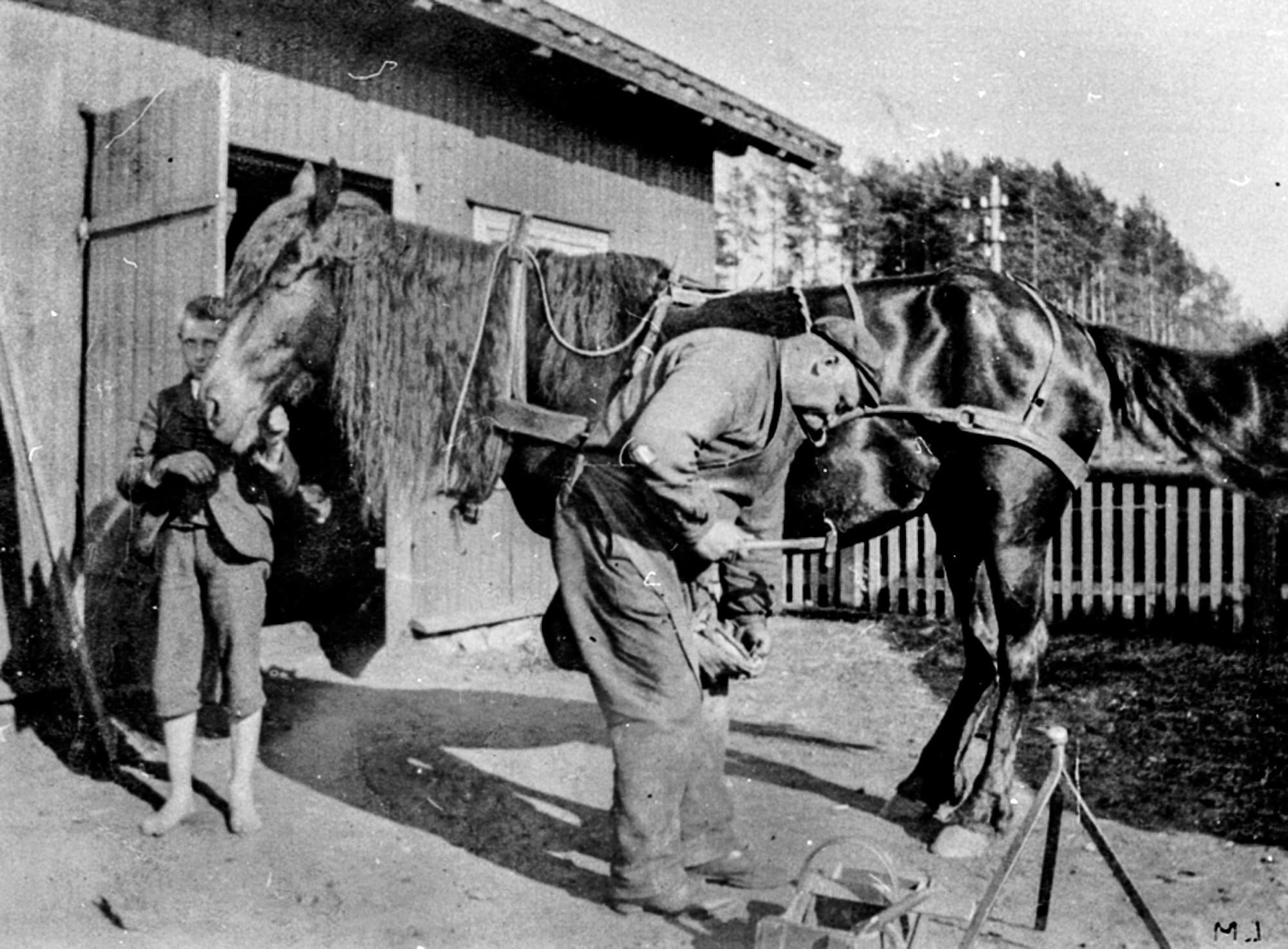 In the Norwegian farming society, the community’s blacksmith was the expert farrier. Shoeing a horse requires great skill and knowledge.

The Viking horse goes to Iceland

The Viking era stretches from AD 800 to AD 1050. When the Norwegians populated Iceland, in the 9th century, they brought with them horses and other domestic animals.

The Vikings are primarily known for their longships, terrorising their neighbours everywhere. However, the horse played an important part in both everyday life and warfare throughout this entire era.

In the early centuries, the Icelanders also brought home horses from the Shetland Islands and other areas. There is, however, no confirmed import of foreign horses to Iceland after the year 1100. Therefore, the Icelandic horse of today has a close resemblance to the horse used by the Vikings. 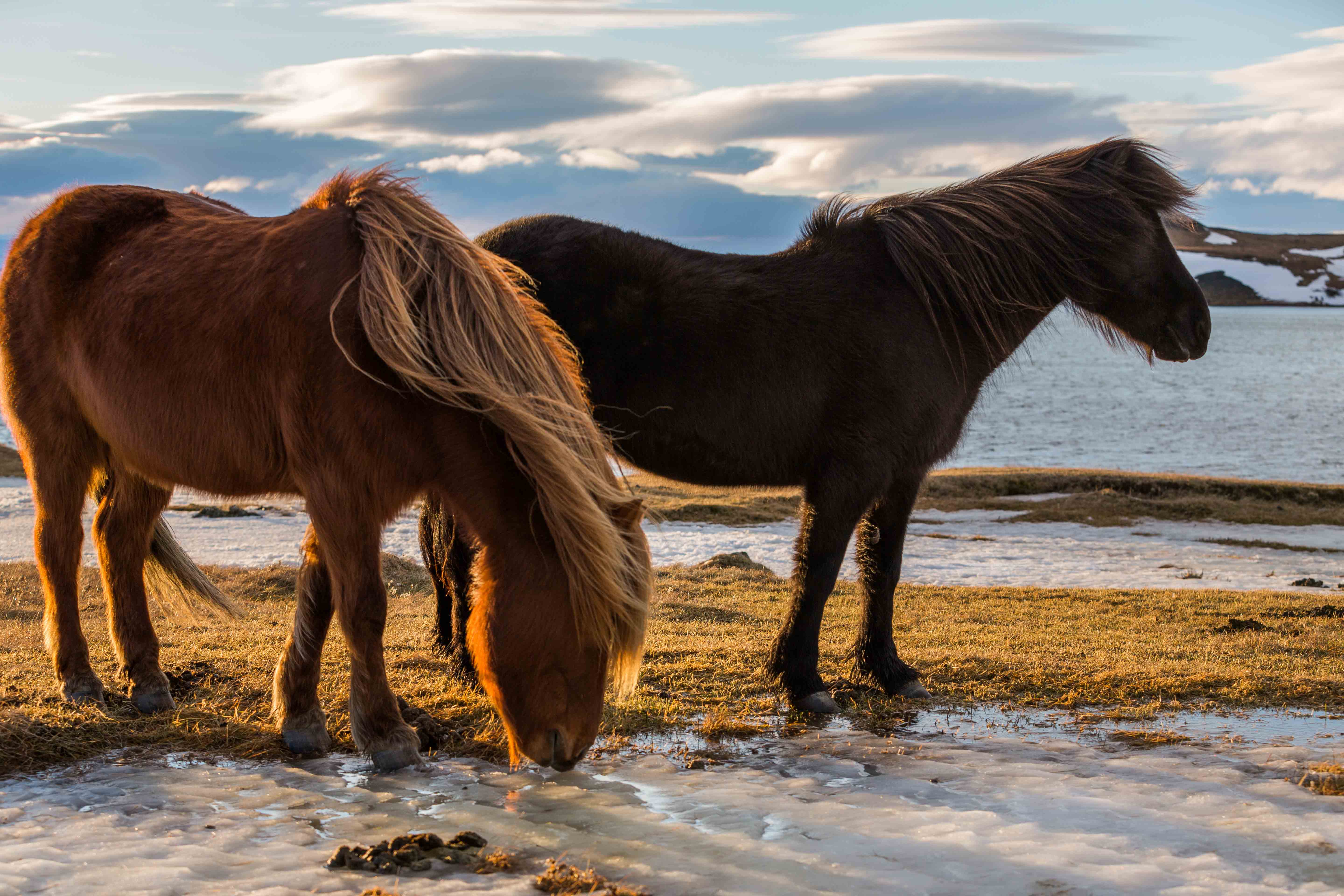 The Norwegian horse and the Black Death

The Black Death – mother of all plagues – ravaged humankind in the mid-1300s.

In Norway, the pandemic came like a firestorm in the year 1349. In a matter of months, it took the life of as much as 60 percent of the population. It was a disaster of biblical proportions. It is impossible to understand the scale of the suffering.

The disease worked with such speed that many people were unable to free their livestock from the stables and sheds. Without food and care, the animals would soon succumb to thirst and hunger.

Many of the domestic animals managed to survive and had to make use of ancient survival skills. The animals followed their natural instincts and gathered in groups. The tale says that large bands of horses migrated south-east through the Norwegian valleys, in search of food.

May we tempt you?
A Norwegians take on the lead-up to the Black Death

Archaeologists have found traces of tall, slim horses also in Norway. These are probably individuals brought in from distant shores and attempted crossed with the smaller and sturdier originals.

Horses of a feeble constitution would not last very long in the Nordic climate.

The Norwegian word for horse

The modern Norwegian word for horse is hest. There are two known words in the old Norse language:

Hross is what turned into the English word horse.

An old gothic word, used in past poetical texts, is jór. The stem of this word is also part of Norwegian first names, like the female Jofrid or the male Jostein.

Today, we often think of the horse with its harness – in front of a wagon. The fact is that many parts of Norway did not have proper roads until well into the 1800s – in some places even later. In the inner Norwegian landscape, ancient and rugged paths were the only routes of transportation; merely suitable for walking, horseback riding – or the journey of a pack horse.

In many places along the coast and the fjords, there were no roads until well into the 1900s. Here people relied on the boat as their principal form of transportation.

Many of the hundreds of thousands of emigrants leaving Norway in the second half of the 1800s – and the early part of the 1900s – knew this way of life very well.

The sleigh – a well-suited contraption

The horse paired with a sleigh-like contraption was a perfect match for the roadless Norwegian topography and climate. It could be used both in summer and winter – and was well suited for steep hillsides and work in the forest. No proper road was required.

The sleigh, in its many variations – harnessed to the horse – has been an essential tool for the Norwegians for time immemorial.

Before the 1800s – in flatter areas of the country – wagons with wheels were, of course, possible to use in the fields surrounding the farm, even in places with bad or no road connections. 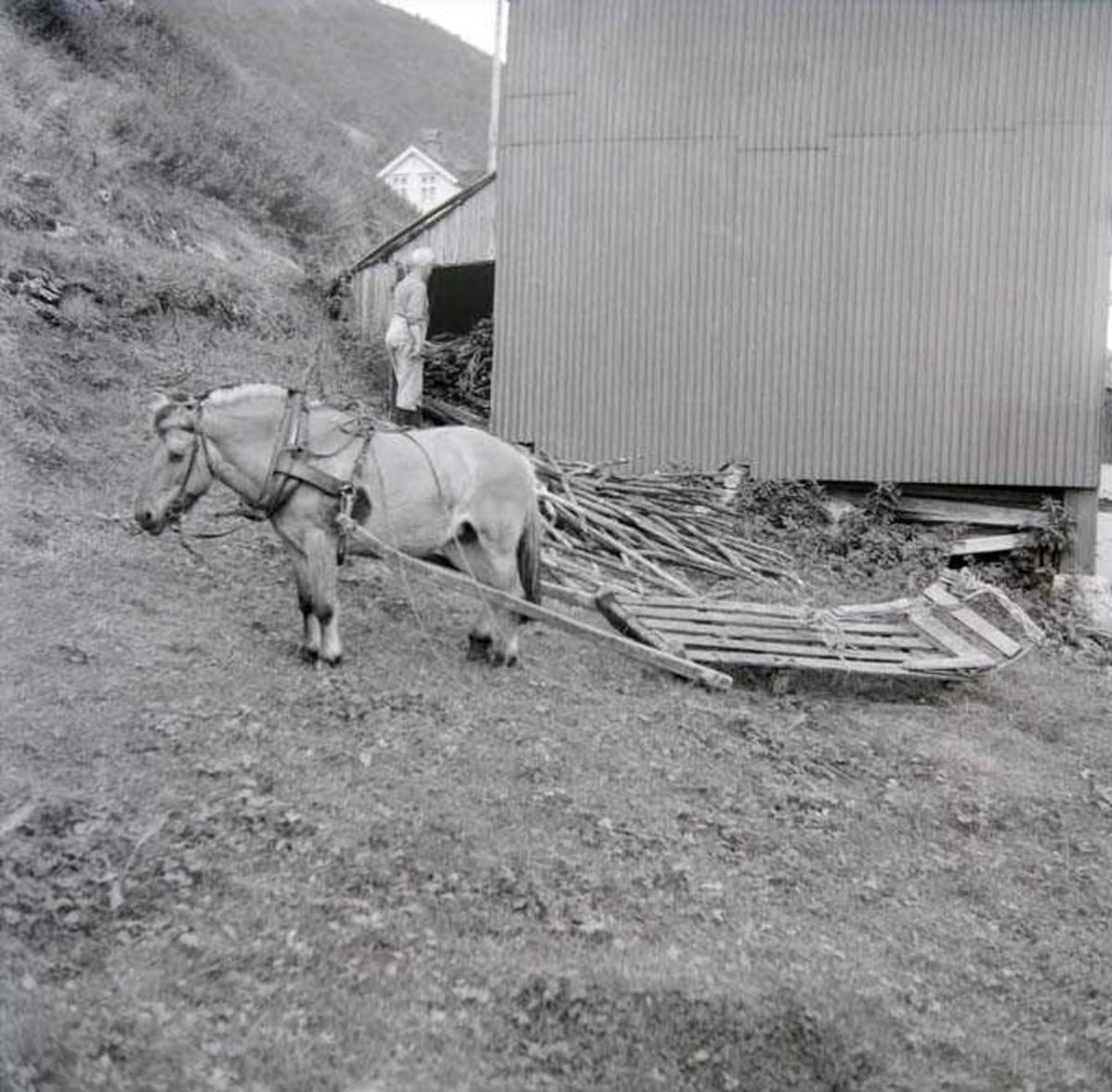 As the centuries passed, the humans selected horses with distinct and desirable characteristics. They also mixed in horses from the outside world.

Today, there are three main Norwegian horse breeds: the Fjord horse, the Dole horse, and the Northlands horse¹.

The Fjord horse is one of the world’s oldest and purest horse breeds and is close to the Tarpan which once roamed the plains of Doggerland. 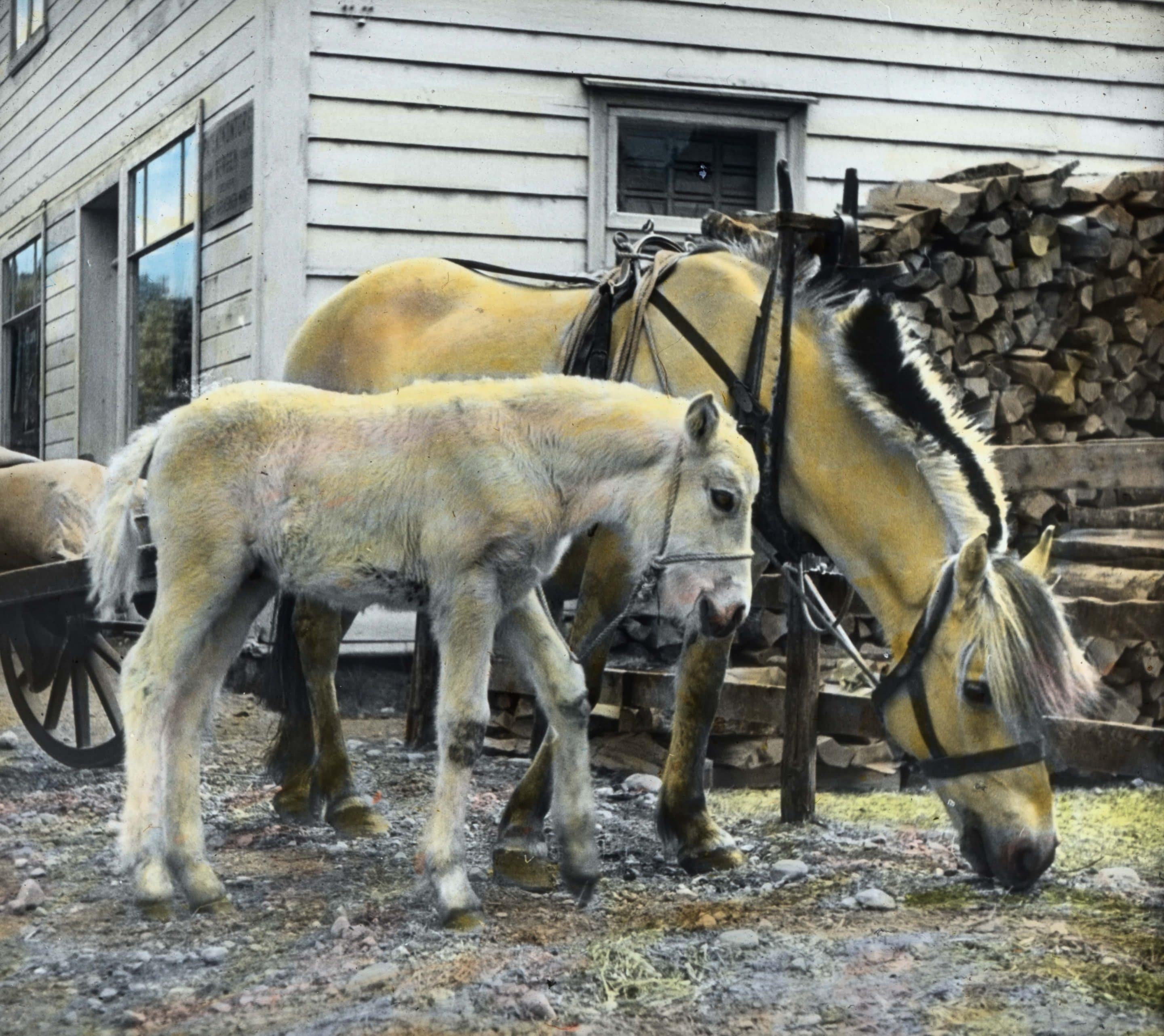 All through Norwegian history, the horse played a vital role. All until the end of World War II.

Luckily, the horse has since gained considerable popularity within the fields of sport and leisure. Now, largely driven by the women of today. Again, the number of horses is well beyond the 100,000 mark.

No longer roaming the wild

The horse is no longer running wild in the Norwegian landscape. But, it is still a symbol closely connected to Norwegian history. This majestic creature plays a vital role in people’s awareness of – and connection to – the ancient Norwegian hunting and farming society.

The once divine, and still very much respected horse will continue to move in the Norwegian landscape. Maybe still – for thousands of years to come.

Click here to read part 1: The Norwegian horse and its history

To see more photos of Norwegian horses, visit The Digital Museum of Norway