Langfjordbotn - in Norway’s northernmost region Finnmark - was the birthplace of Oluf Røde, born in 1889.

We find the small community of Langfjordbotn in the municipality of Alta, in the region of Finnmark. Tourists sometimes make a stop here on their way to the North Cape plateau, a popular and spectacular tourist destination.

Spring in the far north

This far north, spring is always an unpredictable friend. The winter sometimes holds on for dear life and makes it late. If at the same time the warm summer weather comes early, it is over before it even begun. The summer comes like an explosion.

In a typical year, spring in Langfjordbotn lasts from the beginning of June until midsummer. After that time – in my childhood years – we all got very busy – securing enough food for the winter.

A joyous time for the domestic animals

Spring was a joyful time for all living beings – particularly the domestic animals. After a long winter, they could finally escape their dark and cramped abodes to enjoy the vastness of the beautiful North Norwegian landscape.

First out were the sheep, then the rest. The mistress of the farm – being their primary caretaker – proudly watched the animals jumping and running around, at least those who had enough energy to do so. She had managed to get them through the winter alive.

If spring was late, the lack of fodder was always a big concern. In addition to hay, she fed them with whatever she could find: leaves from the trees, on branches cut in the autumn – moss, seaweed and twigs of birch.

Often, the animals were weak and undernourished when spring came. Soon, however, they could eat as much food as they wanted – roaming the outfields – Mother Nature’s own garden.

The men returning from the winter fishing season

With spring, the men returned from the winter fishing. They were usually away for several months a year – at different times – living in open boats or simple fishermen’s shanties along the coast.

Upon their return, they had good money in their pockets, and maybe some colourful cloth, so that the wife could make herself a beautiful dress.

The young men brought with them sweets for the younger siblings – and maybe something nice for that special girl. They gathered in groups and told stories about everything that had happened on their journey. The adolescent boys listened attentively, longing for the day when they could join their fathers and older brothers on their journey.

No rest for the wicked

As soon as the menfolk were back home, it was time to repair and refurbish. There were fences pushed over by the snow – leaking roofs – and so many other things to tend to.

All fences in those days were made of wood – or stone; depending on the building materials available.

The children watched and assisted their parents in their work. Thus, valuable knowledge was passed on from generation to generation.

Maintaining the fences around the infields was important – so that the domestic or wild animals could not enter and eat the grass that was meant for haymaking – or any other crop. 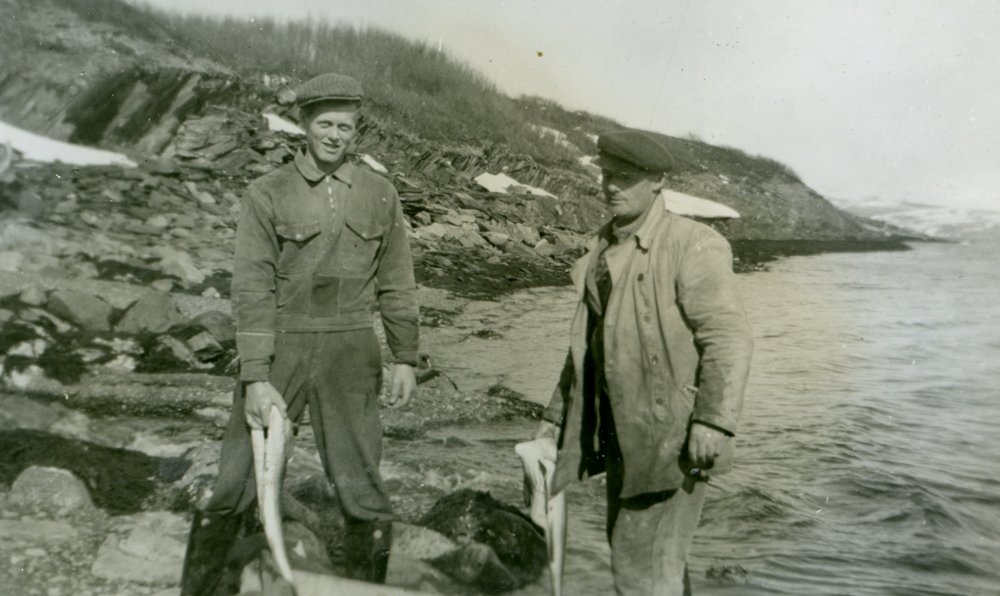 Next, it was time to spread a whole winter’s worth of manure from the domestic animals onto the infields – as evenly as possible.

Then we planted the potatoes. The potato is willing, even this far north – albeit a relatively recent acquaintance. On a larger scale, the potato was introduced to the Norwegian farmer as late as around the year 1800.

The summer season was all about securing food for the winter – both for man and domestic beast. It was a hectic period – involving much work. Every family in those days had to be as self-sufficient as possible.

Making sure there was enough firewood

If the family wanted to keep warm through the frosty winter months, they had to secure a significant amount of fuel. Both dried turf and chopped wood kept the fire going.

People cut the turf from nearby bogs. Cutting turf is hard work. It was placed in a suitable location to dry.

In Langfjordbotn there are mainly broad-leaved trees – like birch and so on. We cut the birch from mid-June onwards. This is the time when the sap floats between the wood and the bark, making it easier to get the bark off the trunk.

The bark on the birch tree consists of two elements. The outer part – in Norwegian called never – was dried and used for waterproofing roofs and so on. The inner bark contains tannin or tannic acid. It was also dried – and used when making leather from animal skins – or for making a conservation fluid used on fishing nets and so on.

The firewood was usually left in the forest to dry – and then brought home on a sleigh during the winter.

The womenfolk were usually the first to get up in the morning and the last to go to bed in the evening.

In a typical fishing community like ours, the women had the full responsibility of the family and the farm when the men were away fishing. It was hard work and a big responsibility.

The mothers taught their daughters, who had to help out from an early age.

The young girls often longed for the moments they could take some time off, to put flowers in their hair and spend time with their friends or that special one.

There wasn’t much time for anything but work. People met at church on sermon Sundays – and at weddings and other gatherings – and at the midsummer dance.

Social rules were strict, and the young ones were very much watched and controlled in those days.

The core rule was that the grass should be left until it stopped growing – usually in early August. Then it was cut and dried.

Every spot of grass was utilised. And there was fierce competition among the young men. They all wanted to be the champion grass cutter.

Weaving in the barn

During summer, the women often moved the loom into the barn. Cloth had to be made for new clothes for the winter.

And in between, they made cheese and butter – stored away in the storehouse.

On the day my mother churned the butter, we got porridge made from buttermilk and flour. It was delicious.

No room for failure

For a young person, watching how the community laboured all through summer, it was almost a scary experience. All focus was on making sure that we had enough food to last the whole winter through. People did not take this task lightly – well aware of the consequences should they fail.

The fight for securing the winter food was ingrained in people’s way of thinking. It was a deep-rooted instinct, handed down from generation to generation.

When the autumn came, the animals were gathered and taken home. They were content after the long summer days.

For the young ones, it was time for school – and life went into a different pace.

The elders sometimes wondered what schooling was good for. How will they find time to learn all the skills they need on the farm when they have to spend so much time at school and with their homework?

The custom of giving each other presents at Christmas had not yet reached our community when I was a child. We were happy if we got a pair of new boots made by reindeer skin.

We had no Christmas tree – but the lighting of the Christmas candle was a welcome custom.

On Christmas Eve – at four o’clock in the afternoon, we had Christmas dinner. It was a feast of glory – at least compared to our everyday way of life.

After dinner, we all rested for a while, and everything was quiet. Then at six, we listened for the church bells – and our father read from the bible.

The highlight of the day for the young ones was the porridge served in the evening. We could eat as much as we liked – and it was topped with sugar and cinnamon – and a large chunk of butter.

On Christmas Day we were not allowed to go out – unless the priest was present in the church. In those days, there were not enough priests to go around all churches, and not every Sunday was a sermon Sunday.

And then it started all over again

In the new year, the menfolk began to get restless and ready for a new fishing season.

Food, clothing and tackle were prepared and ready. Soon they went off, eager to make it even bigger this year. And thus, the annual cycle started all over again.

END_OF_DOCUMENT_TOKEN_TO_BE_REPLACED

END_OF_DOCUMENT_TOKEN_TO_BE_REPLACED
Go to our homepage