For the old Norwegians, making butter was simply a way of preserving the fresh summer milk - turning it into a type of food that could be stored.

The short and intense summer was all about food production – and food preservation. What we see as delicious foods today – cheese, butter, flatbread, smoked fish and so much more – are in fact all nothing but ways to preserve food.

The Norwegians primarily made butter from milk coming from the domesticated cow – preferably soured milk. After milking, the milkmaid sifted the fresh milk through a simple wooden sieve to remove any unwanted content. She covered the sieve with a filter made from hair coming from the cow’s tail. She then stored the milk in a wooden container in a cool place. After a while, the cream – being the fattest and the least dense part of the milk – separated and floated to the top. The sourer the cream, the easier it was to scoop up from the wooden container. Only the cream was used in the butter-making process. To make 1 kilo of butter, you had to start out with around 30 litres of whole or full-fat milk. 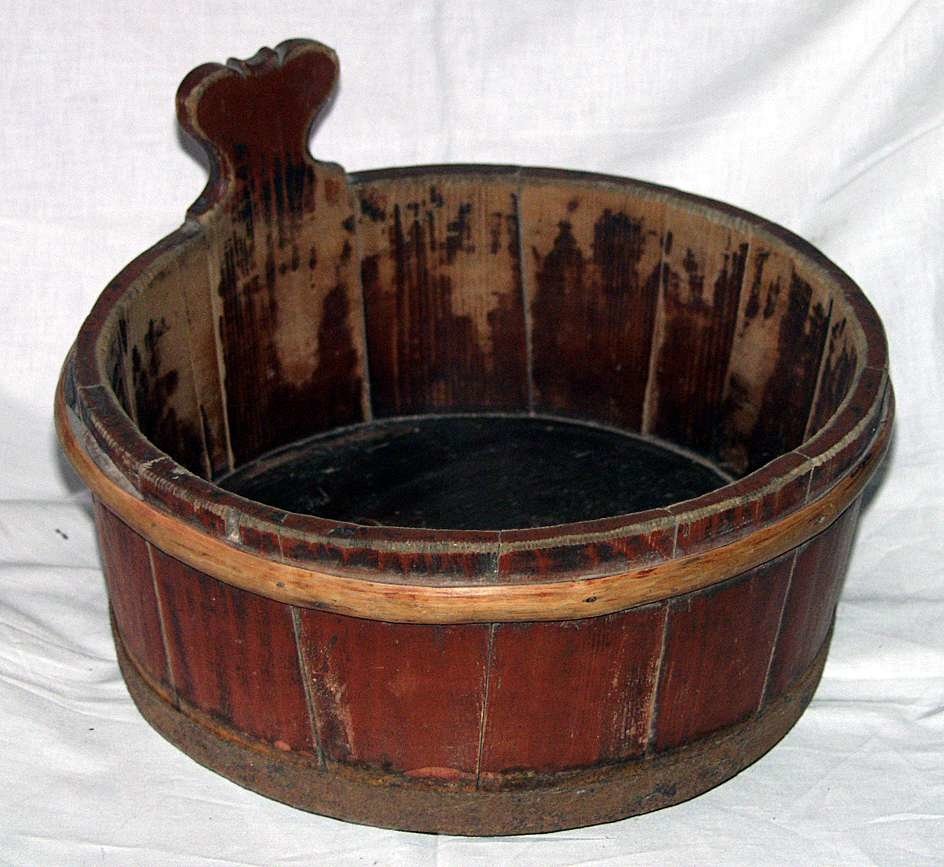 A wooden container used for storing milk. The cream is less dense than the rest of the milk, and would float to the top of the container. From before 1927 and originates from Hemsedal, Buskerud, Norway. | Photo: Haakon Michael Harrriss Norsk Folkemuseum – digitaltmuaum.no – cc by-sa.The milkmaid left the milk and cream to naturally sour for a week or more.

When there was enough cream, the milkmaid poured it into a thoroughly cleaned butter churn and started pulling and pushing the plunger up and down in rhythmic movements. The process could take an hour or more and was hard work. When doing it correctly, there should be a rumbling sound. It had to be done just right: not too fast, and not too slow. Otherwise, the cream would not turn into butter. With the constant movements, yellowish lumps started to emerge. At the end of the process, the churn would contain two elements: butter and buttermilk. The butter was scooped up and put into a wooden bowl. The Norwegians used the buttermilk as a drink – often mixed with water – or as an ingredient in porridge, soups, bread and so on.

Removing all traces of buttermilk

The next step in the process was to knead and wash the butter thoroughly in a wooden bowl – using clean water – making sure that there were no traces of buttermilk left. This was very important, as the buttermilk would make the finished product go bad.

Now, the milkmaid added salt. The salt acted as a preservative. The more salt, the longer the butter stayed edible. 50-60 gram per 1 kilo butter is necessary for butter meant for storage. Otherwise as little as half that amount.

The last part of the operation was to put the finished product into wooden storage containers. Again, the milkmaid washed them thoroughly – and rubbed plenty of salt into the inside surfaces. She had to pack the butter firmly into each container with her hand, making sure that there were no bubbles of air inside. This was to avoid any room for the wrong sort of bacteria.

In earlier times, people used butter as a means of payment – or for barter. Old Norwegian records often list a certain amount of butter as the appropriate payment for taxes to the crown.

The below video comes from the vaults of the Norwegian Broadcasting Corporation – the NRK. Sadly, the audio is in Norwegian only, with no subtitles, but the visuals and our text above will help guide you through an interesting story. Used by permission – all rights reserved.

Did you see this one?
The Norwegian horse and its history – part 1

END_OF_DOCUMENT_TOKEN_TO_BE_REPLACED

END_OF_DOCUMENT_TOKEN_TO_BE_REPLACED
Go to our homepage