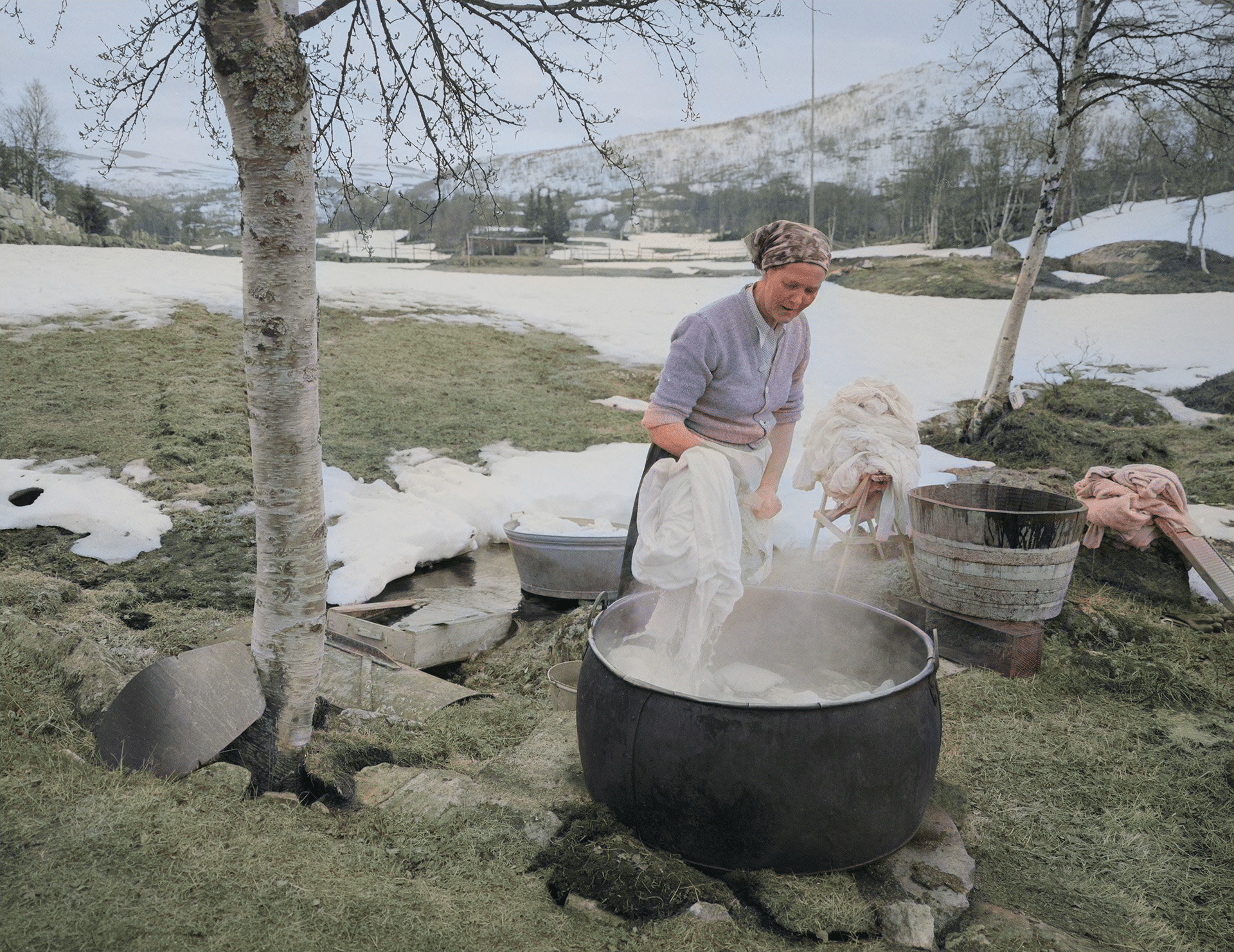 Halvor Floden (1884-1956) was a Norwegian teacher and writer. He grew up on the remote farm Kvanbekksetra, in the mountainous and forest-rich region of Trysil, in Hedmark, Norway. This post is based on his childhood memories.

As with most things on the old mountain farm, doing the laundry was hard work. It was all manual, took most of a day, and the tools were simple. The household chores were my mother’s domain – and her name was Tea Pettersdotter Skjærholden.

A laundry-station by the creek

On our farm, the laundry-station was set up by a nearby mountain creek, with ample amounts of clean, cold, and running water. In the winter, the actual washing took place indoors. But the laundry still had to be brought outside to the creek for rinsing. My mother often had to hack her way through the ice with an axe. It was a cold experience.

The laundry set-up was quite simple:

Later, my mother also got a metal washboard – et vaskebrett – which made life a little bit easier.

The laundry-process started by lighting the fire, and then filling the pan with water. Next, my mother slipped the pouch filled with ash from the fireplace into the pan. The pouch was left in the water until it started boiling. Boiling water and ash create a solution often referred to as potash – pottaske, or as we called it: lut. The potash dissolves grease and works on most stains. Once or twice a year, my mother also made soap by dissolving animal fat in a more concentrated potash solution. This soap was rubbed into stains particularly difficult to remove.

Now it was time to get the laundry into the piping hot water; except for garments made of wool. They received a separate and much more gentle treatment, and were left to soak in a separate container, with soap dissolved in lukewarm water. The rest of the laundry was left in the pan for a good while, occasionally moved about with a stick.

One-by-one the garments were moved over to a separate wooden container, also filled with potash-water, as hot as my mother’s hands could bear to be in. Each piece of clothing was squeezed, rubbed, and wrung out – and this continued until my mother felt that they were ready for the next step. Before the age of the washboard, this next step was using a washing-paddle to beat the garments against a rock or a wooden plank. The purpose of the squeezing, rubbing, and beating, was to push the water through the fabric to remove dirt. When the washboard appeared in our community, my mother stopped using the washing-paddle, and rather spent more time rubbing and squeezing the garment up and down the metal ridges of the board.

Rinsing the clothes was maybe the most unpleasant part of the process – and sometimes the coldest. We were lucky to have the creek nearby, and access to lots of water. To wring out a large piece of cloth is quite a challenge, and is often best performed by two people working together. Finally, it was time to hang up the clothes to dry. If the weather was warm, the garments were laid out onto the grass to dry in the sun.

No one can say that our foremothers weren’t inventive and hardworking, because indeed they were. And in many parts of the world, this is how people do their laundry even today.

END_OF_DOCUMENT_TOKEN_TO_BE_REPLACED

END_OF_DOCUMENT_TOKEN_TO_BE_REPLACED
Go to our homepage