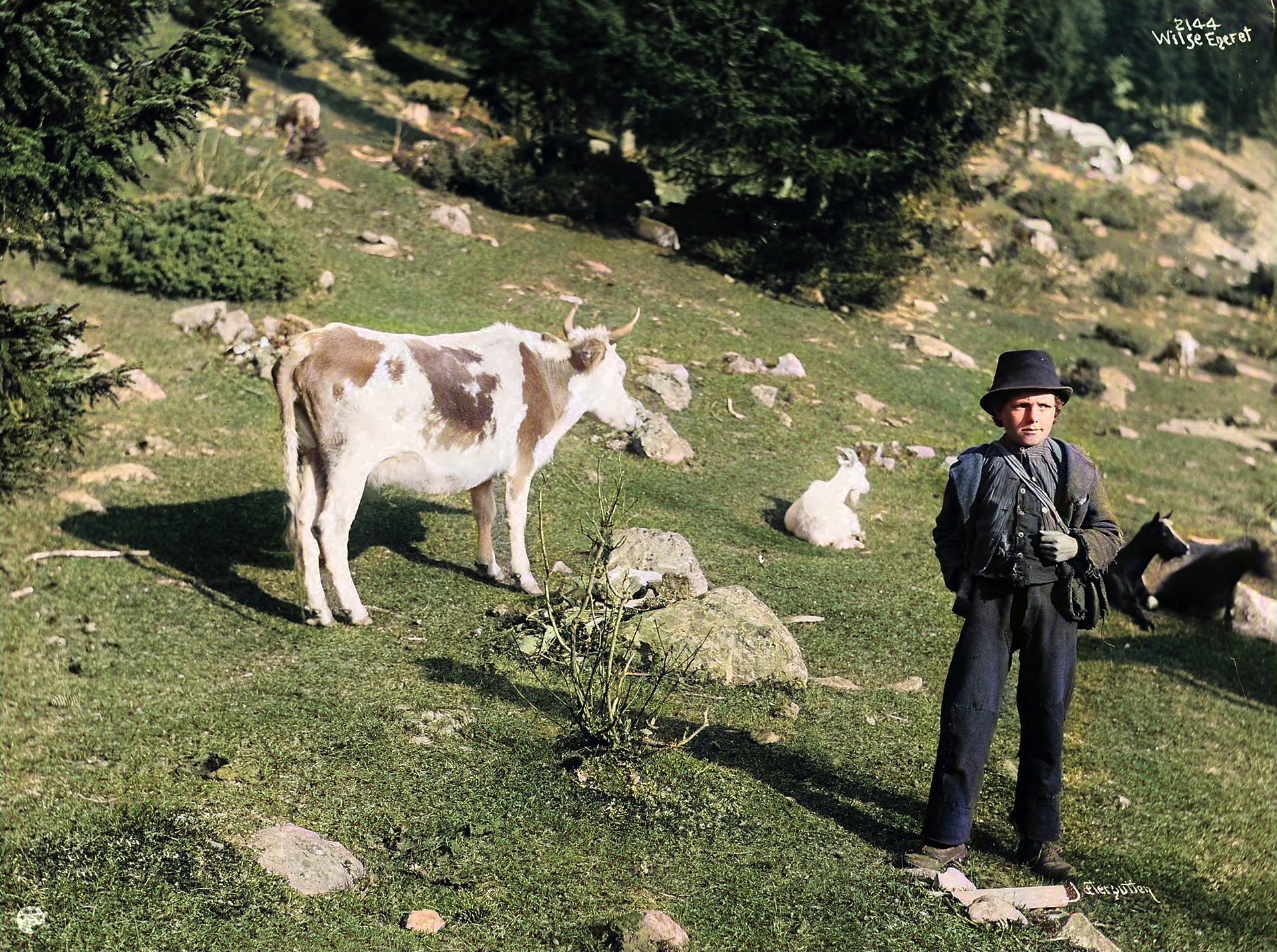 On the historical Norwegian farm, the livestock spent the long winters locked up in cramped and dark abodes, relying on the humans to feed and water them. But during the summer months, they spent their days in the mountains and the forests, feeding on Mother Nature’s rich resources, moving freely outside the fences, through the open landscape.

Looked after by the children

It was often the older children who looked after the animals during the day, when they were out grazing. The Norwegian word for a herder is a gjeter. In old Norwegian records, we often find the words gjeterpike or gjetergutt listed as someone’s profession, meaning herder-girl and herder-boy. The word for herder-children is gjeterbarn.

Off to the seter

The summer pastures – the seter – were often located far away from the home farm. There were usually a simple cabin there for the milkmaid and the herder to live in, and a simple night-shed for the animals. The milkmaid – budeia – milked the cows and the goats twice a day, and made cheese, butter, and other dairy products. After the morning-milking, the herder took the animals out to feed in the surrounding landscape. Between June and September, both the milkmaid and the herder had a lonely existence, and a big responsibility.

Guarding the animals against danger

Guarding the farm-animals against predators was one important task. But the herder also had to make sure that the animals did not wander off too far away from the seter. And that they stayed together and did not mix with other livestock nearby. There are many stories of how animals fell off cliffs or got stuck in a bog somewhere. Sometimes, the herders had a dog to help them, and as a companion.

Haymaking-meadows were often established in connection with the summer pasture farms. These meadows were usually cut late in the summer, by people coming up from the home farm. There were usually no fences, and the herders were under strict orders to keep the animals away from the lush grass. Anyone who has experienced a wilful cow knows how difficult a task that can be.

What if a wolf came along?

In some areas of the country, predators posed a significant threat: bears, wolves, wolverines, lynx, eagles, and others. And what could a child do if a wolf decided to attack? Often, they tried to scare the animals away by making noise. This could be by screaming and shouting, blowing a small birch trumpet – stuttlur, a goat’s horn – bukkehorn, or similar. A large dog was also of great help. But if the intruder had made up its mind, it was little the herder-girl or -boy could do but to run for help.

Knowing the time without a watch

The herder had to make sure that the animals were back on time for the milking in the early evening. Instead of a watch, they used the sun to guide them. Often, the milkmaid called them home with her distinctive and long-reaching call – the kulokk.

A shout-out to Norway’s gjeterbarn

We would like to give a big shout-out to the herder-children of all times. Despite the hard work and the lonely existence, many happy memories have been shared over the years. In particular, we would like to mention Anna Ingebrigtsdatter Bolme (1886-1982), who in the year 1900 worked as a gjeterpike at the Storholtan farm in Rindal, aged 14.

END_OF_DOCUMENT_TOKEN_TO_BE_REPLACED

END_OF_DOCUMENT_TOKEN_TO_BE_REPLACED
Go to our homepage