Some claim that porridge is the oldest hot dish in the Norwegian diet. Was it to our ancestors what bread is to the modern family of today?

More than grain and water

In the old Norwegian farm kitchen, the oven-baked bread was almost non-existent. Porridge, flatbread, and lefse – a relative of the tortilla – dominated throughout the Middle Ages and up to our modern day. Many think of porridge as a tasteless substance, often associated with poverty. In its simplest form, it consists of crushed grain and water.

Richer versions of the dish have been served throughout Norwegian history – both in everyday life and as a treat at life’s many feasts and celebrations: at Christmas – and in connection with baptisms, weddings, and funerals. The variations are as many as there are districts and inventive cooks in this long-stretched and diverse country. People also served porridge when celebrating the end of the growing season – and when the community came together to help their neighbours – for example when building a barn.

To add some flavour and nutritional value, the farmer’s wife experimented with the traditional ingredients available to her: coarse and fine grain, sweet milk, sour milk or cream, butter, salt, syrup and so on. Today, the Norwegians typically eat porridge with a layer of sugar and cinnamon on top – and a chunk of butter in the middle, melting and blending in. According to old beliefs: a lump of butter shaped like a cross, protects against evil powers.

Grain has been available since the introduction of agriculture; in Scandinavia some 6,000 years ago. In earlier times, the Norwegians cultivated barley and oat. These are hardy plants and well-suited for the colder Norwegian climate.

The mistress of the house usually served porridge several times a day. She prepared a generous portion in the morning – and served it hot for breakfast – and cold later in the day. With the cold porridge, she often added some warmed-up milk. She also fried slices of cold porridge in fat and served it with other food – like we do potatoes today. People travelling also often brought cold porridge with them in their rucksacks – or in a wooden box. The same applied to field labourers working far from home. 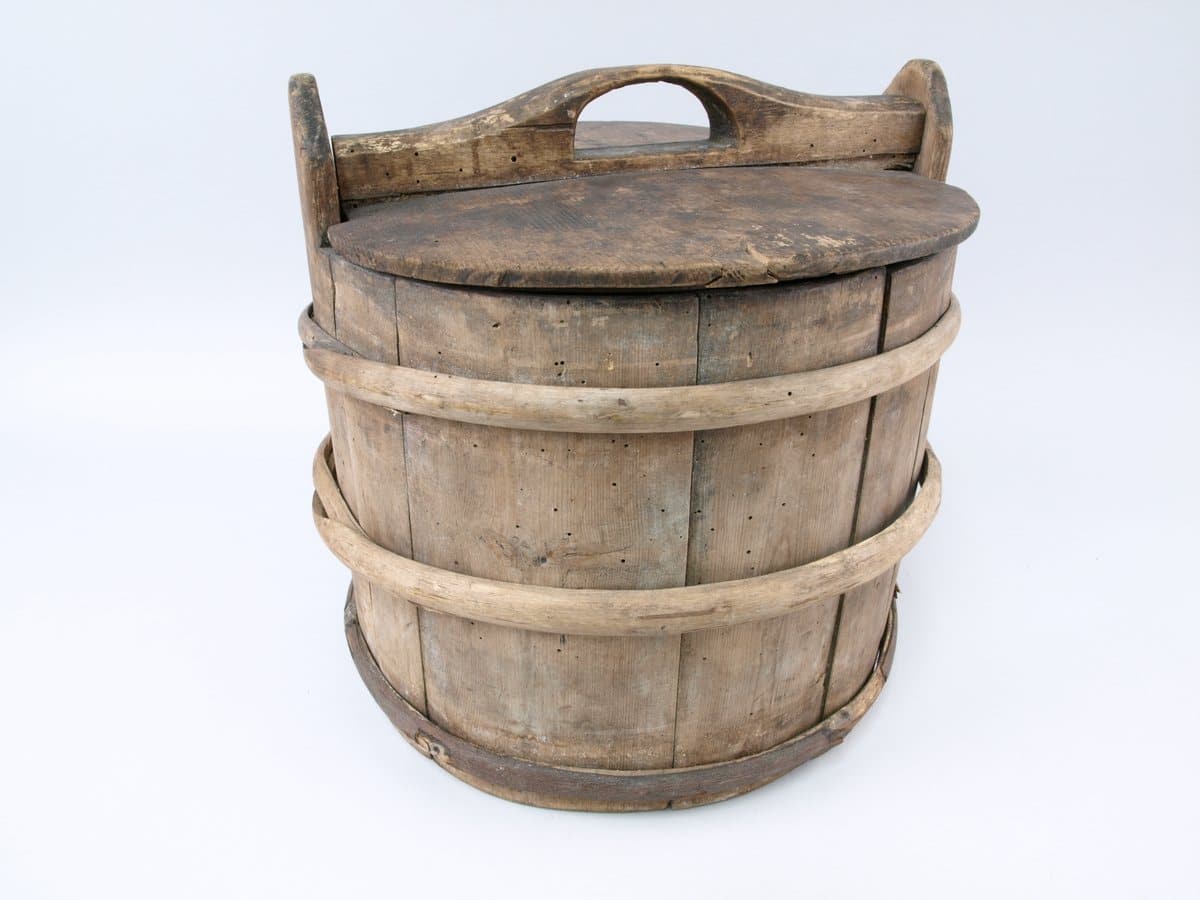 Eating from the same bowl

In the old Norwegian farming community, it was common for all to eat from the same bowl or dish. The cook placed the dish on the table, and everybody tucked in from all angles, using their very own wooden spoon. When they had finished eating, they licked their spoon clean and stuck the handle in between two logs in the wall of their log house home.

Getting the porridge just right is a skill – and preparing it in a large pot over an open fire can be demanding work. The cook prided herself on not having any lumps in the finished product. In connection with weddings and other large gatherings, people called in particularly skilled cooks to make sure that the food was of the highest quality. Women from smaller farms or cottages often took on extra work on occasions such as these. A good cook was a well-respected lady.

A wedding at Kvilvang Nordre farm, Tufsingdalen, Os, Hedmark, Norway. The fiddler is leading the procession – as the porridge is brought in to hungry guests. Taken prior to 1928. | Photo: Peder J. Bredalslien – digitaltmuseum.no MINØ.024018 – public domain.

The almond for Christmas

A Norwegian Christmas tradition is to add one single almond in the pot before serving. The person who finds the almond usually wins a prize – and is the recipient of much attention. Over the years, many a child – with a great sense of disappointment – has watched a sibling find the coveted almond. Many say that Norway is a nation built on porridge. Let us all honour our ancestors by respecting their food traditions – and hail their ability to make the best out of what resources they had available.

END_OF_DOCUMENT_TOKEN_TO_BE_REPLACED

END_OF_DOCUMENT_TOKEN_TO_BE_REPLACED
Go to our homepage