The Fjord horse is one of today’s oldest and purest horse breeds. Its historical habitat is Norway's western coast, with its deep fjords and steep mountainsides.
LA Dahlmann | talk NORWAY 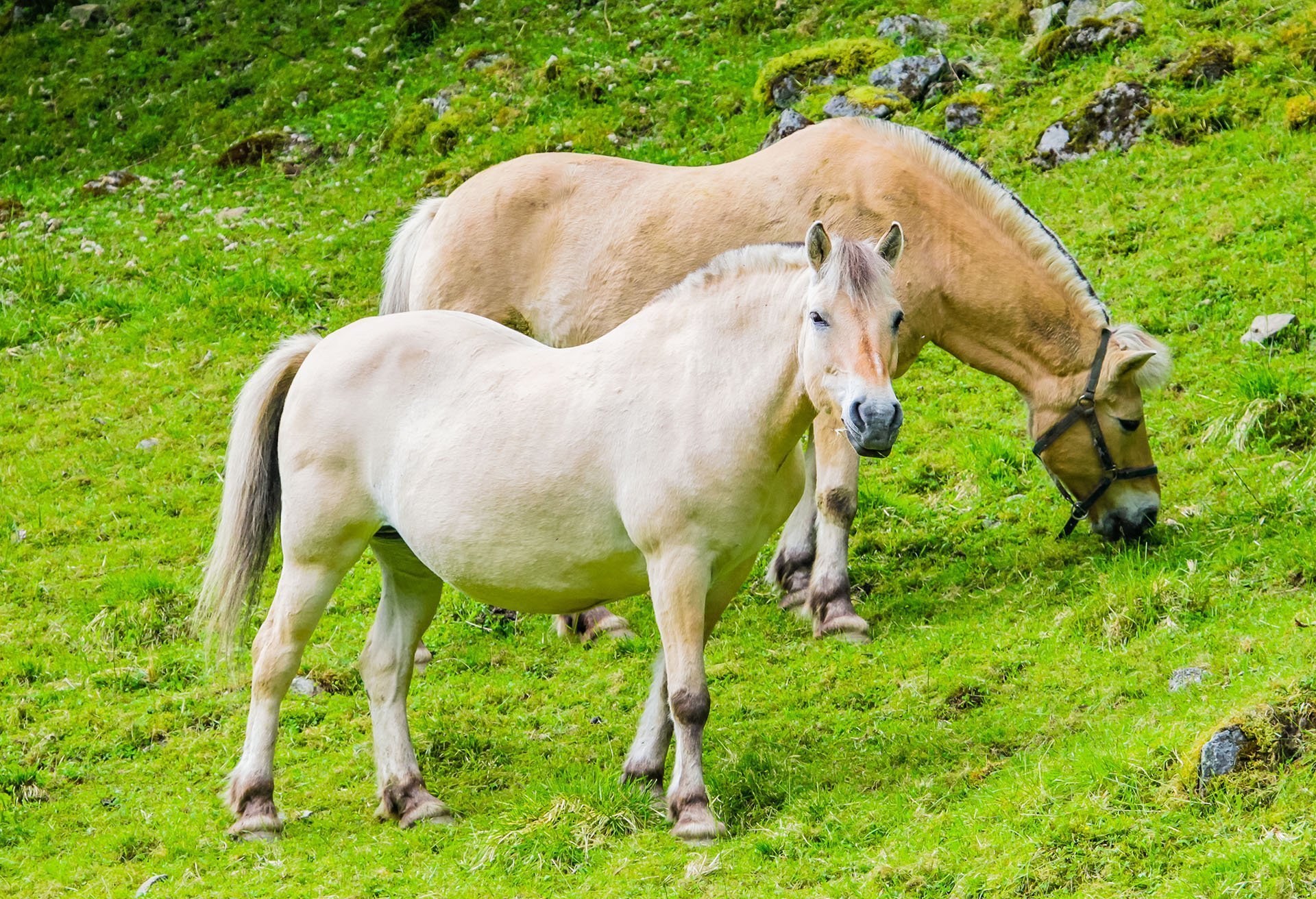 Locked in by the landscape

The Fjord horse, with its ancient features and markings, has roots that stretch back thousands of years. The inaccessible topography of its west-Norwegian habitat, is believed to have protected the breed from extended external influence. The reduced number of natural predators in this area, may also have allowed the breed to remain wild for much longer. The Norwegians call it a fjordhest – a fjording – or a vestlandshest.

First came the goat – then the Fjord horse

Historically, the coastal population lived on small farms, and were often fishers first and farmers second. Until not too long ago, the landscape was roadless and wild. Any transportation had to happen by boat – or on narrow and sometimes treacherous footpaths. It is said about the creation of these paths that – first came the goat, then the Fjord horse.

The Fjord horse’s whole anatomy is shaped by millennia living in a steep landscape. The breed is small, and, with its robust frame and strong legs, it moves like a master through the rocky environment. The Fjord horse is a perfect packhorse, a tireless workhorse, a perfect companion and workmate. It was said that if a Fjord horse got pushed over by a heavy load in a steep field, it would lie perfectly still until its owner could release it from the shafts or the harness.

In the second half of the 1800s, tourism found its way to the Norwegian fjords. Just like today, ships arrived full of people wanting to see the sites. The local farmhorses pulled the wagons or carried the tourists up the hills: to a glacier or some other local landmark. The extra cash did wonders for the local households.

Easier to feed through the winter

Compared to many other horse breeds, the historical Fjord horse needed less hay and other fodder. The climate on the west coast is also milder and the winter shorter, which meant that the horse could graze outdoors for a larger portion of the year. Compared to other parts of Norway, it was more common for small west-Norwegian farms to have a horse of their own.

A status symbol that smelled good

A horse on the farm gave its owner status. Even if it was just a small Fjord horse of dubious origin. It was said that the Fjord horse smells good. Maybe what people meant was that it smelled like home. It was – and is – a patient, strong, tough, and relentless companion, loved and respected by both children and grown-ups.

Sad was the day it had to go

A farmhorse could live with the family for over two decades, and it was hard to see it go. There are stories of how people refused to cash in the check coming from the abattoir, the day that their beloved friend finally had to meet its maker.

Emigrated to all corners of the world

The Fjord horse has found an enthusiastic and loyal following across the globe. With its distinctive physique and dun coat, and its manually cut crescent-shaped-mane, the Fjord horse is a beautiful creature. Fjordingen has been with us for millennia – let us hope that it will stay for a long time still.