The most significant sections of Norwegian productive soil can be found in the counties of Trøndelag, Hedmark, Oppland and Rogaland.

It began with the ice ages

In Northern Europe and Scandinavia, the last ice age ended some 10,000 years ago. The landscape that appeared from the melting ice was barren and utterly transformed. For millions of years, kilometres thick ice sheets had moved in irregular cycles – expanding, retreating, and expanding again. With extraordinary force, the glaciers attacked like slow-moving oceans – grinding, crushing, and reshaping the underlying and ancient rock formations. It is with this beginning in mind that we take a closer look at the layout of today’s mainland Norway.

The illustration below shows an overview of the Norwegian landscape, as stipulated by the latest geological surveys. What these numbers do not reveal, however, is Norway’s access to vast areas of ocean.

Where do we find the most fertile land?

The most significant sections of productive soil can be found in the counties of Trøndelag, Hedmark, Oppland and Rogaland. If we add on Akershus, Østfold and Nordland, these districts account for 65% of the total agricultural area. Significant parts of the most fertile land were once below sea level. But as the enormous weight of the ice disappeared, the seabed rose in the millennia that followed, in places several hundred metres. Stretches of agricultural land are also found alongside the edges of the fjords and in the many river valleys. 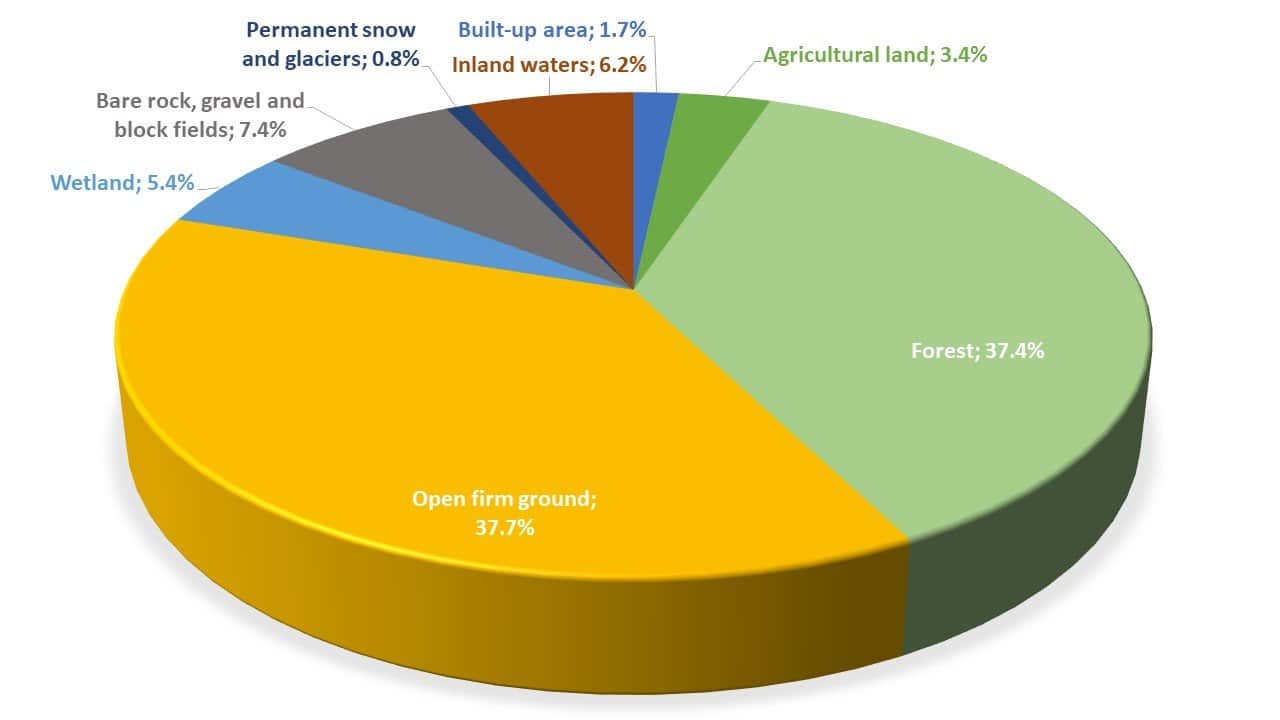 Utilising the forests and the mountains

All through historical times, people took maximum advantage of the forests and the mountains. In addition to using this part of the landscape for hunting and gathering, they sent their livestock there for summer pasture – and gathered added animal feed there for the long and frosty winter months ahead.

The ocean – a real treasure trove

All along the long-stretched coastline, people relied more on harvesting the ocean than farming the land. The typical coastal or island family had a small farm, large enough to feed a few animals and to produce some grain and other essentials. However, it was the food provided by the sea that played the most significant part. All until the early 1900s, fishermen along the entire coast set out in open rowing or sailing boats in search of the large shoals of migrating fish. In modern-day Norway, big fishing vessels contribute significantly to the Norwegian economy, and Norway is one of the top fish exporters in the world. It would definitely be fair to add the ocean as part of the food-producing portion of the country.

The first people arrived in Norway some 12,000 years ago. In the year 1000 AD, the number of individuals had only increased to about 150,000. In the year 1700, the population was still just 504,000. All through the historical period – up until the industrial revolution – the Norwegians were hunters and gatherers – and from around 4000 BC also farmers. The landscape – paired with the cold climate and the traditional hunting and farming methods – seems to have been unable to sustain the more significant populations seen in other countries of a similar area size. Since the year 1700, the Norwegian population has increased dramatically, to 5.2 million in 2017. Descendants of the nearly 1 million Norwegians who emigrated during the second half of the 1800s – and the beginning of the 1900s – would have added considerably to this number. In comparison, Italy with its warmer climate and a smaller landmass has a population of 61 million.

Recommended read: The old Norwegian farm | and the need for water

This lush field was once the bottom of the ocean. Rygge, Østfold. | Photo: LA Dahlmann – cc by-sa.

END_OF_DOCUMENT_TOKEN_TO_BE_REPLACED

END_OF_DOCUMENT_TOKEN_TO_BE_REPLACED
Go to our homepage