In my childhood, life was simple. And the small joys of Christmas lifted our spirits - and delivered us safely into the new year.
LA Dahlmann | talk NORWAY 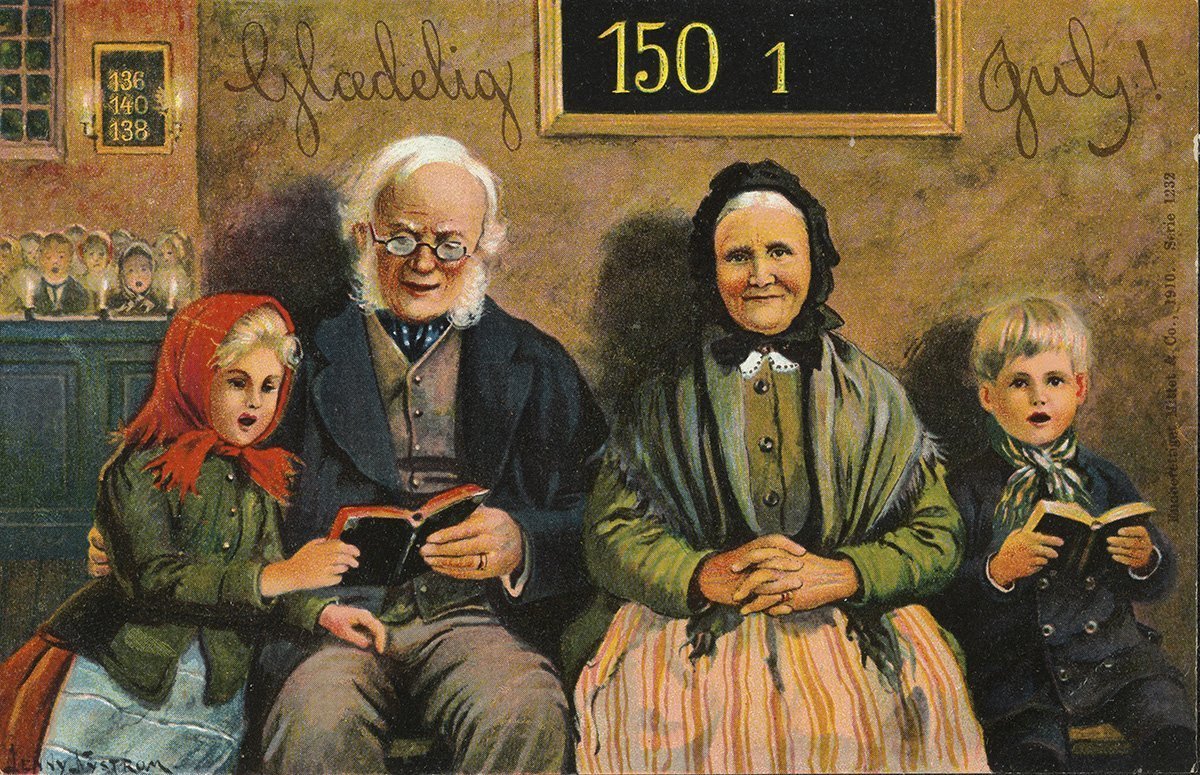 The below text is based on childhood memories from the late 1800s – and are from the northern parts of Norway. The contributors are Othilie Johnsen, Thomas Johansen, and Mimmi Benjaminsen.

We were rich in other ways

I have happy memories from my childhood. We didn’t have much of gold and riches, but I can’t say that we ever felt poor. As long as we had food on the table, and clothes to keep us warm, we were happy and content.

My parents were honest and hardworking, and I admire them for what they achieved. In my eyes, there was nothing they could not do. With their two pair of hands, they created almost everything we owned.

Christmas was a particularly exciting time for us children. Outside it was dark and cold, but inside our simple home there was light, both from the fire and in a spiritual sense.

The weeks leading up to the big day was full of hustle and bustle. There was lots of activity all year round, but Christmas came with something special. It was like a rush that took us through the darkest days of winter – and delivered us safely into the new year; which came with a renewed promise of spring and the bright light of summer.

Every year, as regular as clockwork, travelling salesmen came just before Christmas. Many of them had travelled far, carrying their wares from house to house.

We children watched intently as they opened up their magical bags. Colourful paper and shiny objects tickled our imagination.

We almost burst with pride if Father went to get his wallet to buy something. Later, Mother let us admire the treasures for a while, before putting them away, into the large corner cabinet.

If it was not too late in the day, we would rush over to our neighbours to share our exciting news. Each time we repeated our tale, the colours became brighter, and the treasure in the corner cabinet even more magical.

The small things gave us so much joy back then. And nothing is more beautiful than the look of joy on a child’s face, or the feeling of contentment and pride.

Sending Christmas cards was something new in my youth. In order to get a reply before Christmas, you had better send them early.

It was often the teenagers who were most keen on the idea. And when Christmas came, they would count the number of cards they had received – and compare with their friends.

In my community, it was not yet common to give each other Christmas presents. But we children usually got something new – something we needed.

It could be a pair of boots, or socks, or mittens.

Today, we often think of the Christmas tree as the centre of our decorations. But in my childhood, in the late 1800s, it was quite unheard of.

Many people saw the tree as unchristian and as a sign of idolatry.

It is strange how customs and beliefs slowly change, and how new ways are adopted by new generations.

Today, we spend more and more of our pre-Christmas time in shops. This can almost stand as a symbol of how different our society has become. And it has all happened during my lifetime.

In the old world, everything was made and prepared at home, and with our own two hands.

The preparation of the Christmas food, enough to last all through the season, was a big focus.

Even for families that had limited resources, the food had to represent something different from everyday life. The effort and hard work in itself gave people dignity and a sense of pride.

This was quite a process and took a long time. Both were made from the farm’s own produce.

The dram was made from potatoes – and yeast made from hops and flour.

Ideally, the potatoes were first left outside to freeze, then boiled, and later mashed in with the boiling-water. The yeast was added to the watery mash – and it was all set aside to ferment until it was ready to be distilled.

With a small glass of dram, to soften the blow, came often a piece of sugar or two.

The beer was made from grain. To start the sprouting process, sacks of grain were put into the creek to soak.

In our home, Christmas started in earnest at 4 o’clock on Christmas Eve. Then the table was set with meat, rich broth, and flatbread.

The regular dinner at noon was dropped that day, and we went extra hungry to the table.

We dunked pieces of flatbread in the broth – and ate as much meat as we possibly could.

Prayers were read both before and after the meal.

Next, we all had a rest, and everything and everyone had to be quiet. Only a simple candle was left burning.

But by 6 o’clock we were awake and alert again, ready to hear the distant church bells ringing. Both young and old listened quietly. And when the bells fell silent, my father read the story of the Nativity.

A bit later came the highlight of the day: the extra rich and tasty Christmas porridge. On top, we had sugar, cinnamon, and a big lump of butter. And we could eat as much as we wanted. It was true bliss.

Back then, there were not enough priests to cover every parish. If it was our time to have the priest on Christmas Day, we all went to church. If not, my father read from the bible, and we sang hymns galore.

Except for the potential trip to the church, no one was allowed to go outside on this day, and everything was to be quiet. For us children, it was quite the challenge.

On Christmas Day, my mother made the best dinner she possibly could; and the meal made us occupied for a while.

With the 26th of December came the many feasts and celebrations.

People travelled from house to house, and many did so until the 13th day of Christmas.

There was food and there were toasts, and sometimes a wedding at the top of the year.

And then a new year began

As the Christmas celebrations came to an end, we were ready for the new year.

Most of the men got restless – and started preparing their departure for the winter fishing expeditions. My mother, and the womenfolk of the community, once again took charge of the many duties at home.

In many ways, our modern life has made our existence easier. But I remember my simple childhood Christmases with great joy.

Just like the treasures in the corner cabinet, I store the thought of them in my heart. As do I the memories of my beloved mother and father – my siblings – my grandparents – and all the great people that once were in my life.

Sami people | sleeping on a bed of glowing embers | Sapmi
When there were no makeshift or permanent dwellings nearby, the Sami hunters and herders sometimes slept under the open sky.