Bergen is Norway's second-largest city and one of the country's oldest urban locations. The first post-viking king, Olav Kyrre, gave it market-town-status around AD 1070. 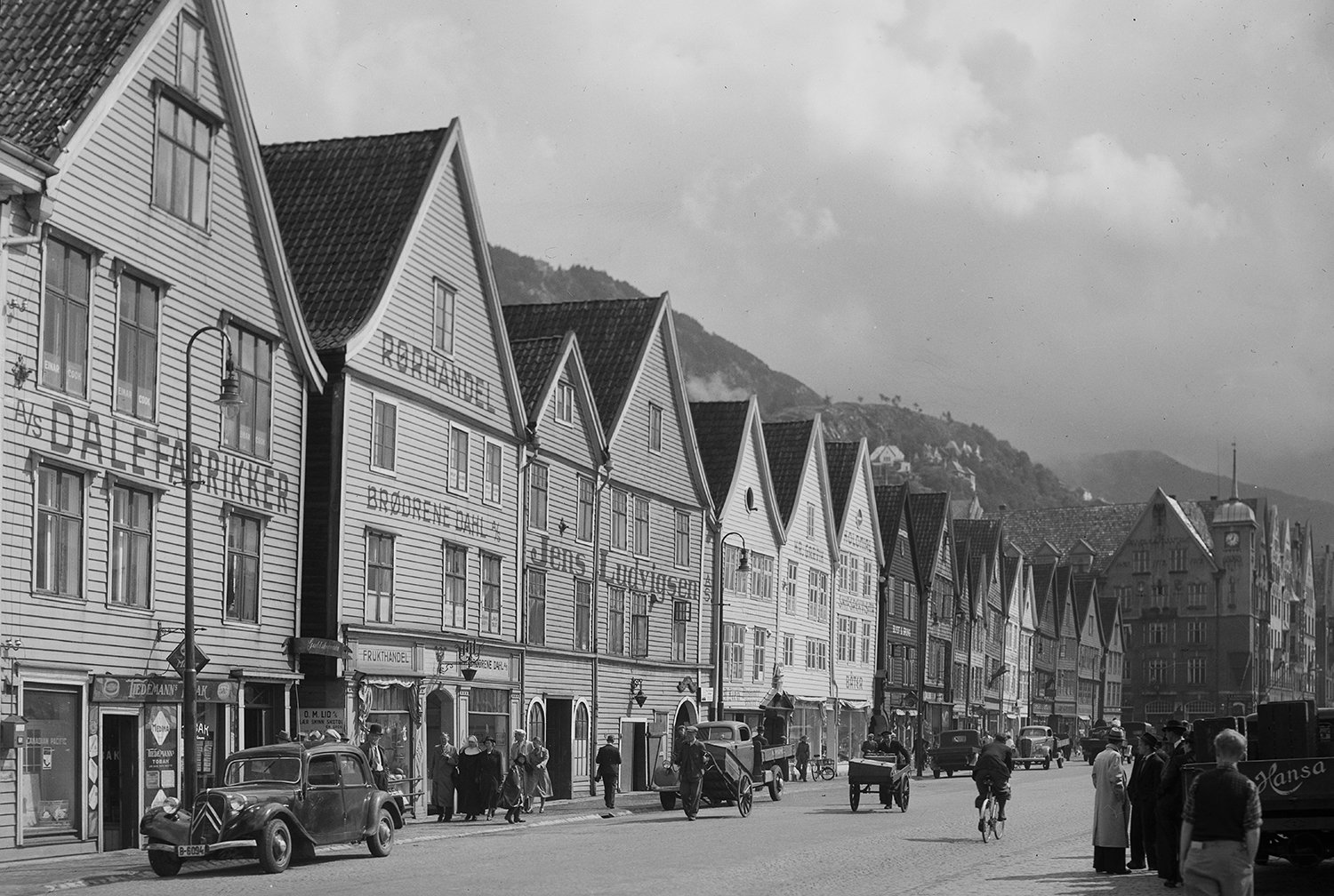 Historically, Bergen was also known as Bjørgvin. It was Norway’s largest city all through the Middle Ages, and it still was as late as in the 1830s. To give you a perspective of the size of the population, let us use the 1769-census. At the time, Bergen had 13,735 inhabitants, out of a Norwegian total of 723,618. Today, the city of Bergen has a population of about 300,000, and is Norway’s second-largest.

From the mid-1800s onwards, Norway’s inland regions opened up with roads and railways. Prior to this time, boats on the coastal waters were the main means of transportation. Trading hubs developed all along Norway’s long-stretched coastline, and Bergen became the most significant of them all. Not only was it a centre for the surrounding inland regions, and a landing place for the local ocean fishers, but it also acted as the heart of the whole of Norway’s coastal traffic.

From around 1350 – and for the next 200 years, Bergen’s trade was dominated by the Hanseatic League, a North-European commercial and defensive confederation of merchant guilds and market towns. The organisation had its roots in Northern Germany. As a centre for import and export, Bergen became a melting pot of development and cultural influence. The famous Bryggen, a section of the city with old and characteristic wooden buildings and alleyways, has roots that stretch back to this historical period. Archaeological excavations have discovered rich finds from Bergen’s earliest history. If you ever pay the city a visit, we recommend that you check out the Bryggen Museum. The museum is also the starting point for guided tours, leading you through the historical sites.

Plundered and burned by pirates

Bergen was plundered and burned 4 times by a group called the Victual Brothers; later the Likedeelers. They were mercenaries, privateers, and pirates operating in the Baltic and North seas. The attacks happened in 1393, 1428, 1429, and in 1432. The worst attack took place in 1429, when the pirates attacked with 400 men and 7 ships. Later, 10 more ships joined them in the assault. The town was plundered and destroyed by fire.

Is it always raining in Bergen?

If you ask any Norwegian to mention 3 things they know about Bergen, we are certain that one of the responses will be: it rains a lot there. And they will be right; there are as many as 200 rainy days in Bergen per year. This is the simplified explanation: clouds come in from the ocean to the west, they hit the hills surrounding the city, are pushed up and hit colder temperatures, and down comes the rain. But don’t let the rain stop you from visiting this west Norwegian pearl of a city. Just make sure that you bring some wind- and watertight clothes. As the Norwegians say: there is no such thing as bad weather, just bad apparel.

The world-renowned composer Edvard Grieg (1843-1907) was born in Bergen. Today, his former home Troldhaugen is a museum, and his and his wife Nina’s ashes are entombed at the property. As a curiosity, we can mention that the family name Grieg once was Greig, and that Edvard was of Scottish descent.

Doctor Gerhard Armauer Hansen (1841-1912) discovered the bacteria that causes leprosy in 1873. Today, the disease is usually referred to as Hansen’s disease. When in Bergen, we recommend a visit to the Leprosy Museum, a monument to the suffering of many Norwegians.

By many, the writer Ludvig Holberg (1684-1754) is thought of as Danish. But, he was in fact born in Bergen and did not leave Norway until he was 18. His most known work is perhaps the play and comedy «Jeppe on the Hill».

The southernmost port of the Hurtigruten cruise liners

Hurtigruten – meaning the fast route in Norwegian – started as a maritime passenger and freight link between Bergen and the far-north-eastern town of Kirkenes in the late 1800s. The Hurtigruten ships have sailed along the Norwegian coast ever since, in all weathers, and has played a significant role in the survival of many of the coastal communities. Today, the Hurtigruten is also a big player in the tourist market – showing off Norway’s magnificent coastline. They also offer additional cruises to exotic destinations like Iceland, Svalbard and Greenland. If you travel in the summer, you might experience the thrill of seeing the midnight sun – north of the Arctic Circle.

If ever in Norway

If you are ever in Norway, we strongly recommend a visit to Bergen. And if you would like to know more about this gem of a city, go to visitbergen.com – a great place to start planning your journey.

END_OF_DOCUMENT_TOKEN_TO_BE_REPLACED

END_OF_DOCUMENT_TOKEN_TO_BE_REPLACED
Go to our homepage